My weight today was 256.8 lbs.  That’s almost 20 lbs more than a year ago.  That’s unacceptable.  There are a few factors – and I have some ideas to combat them.

I started this blog to be accountable.  I’ve lost track of that.  I no longer weigh daily.  I don’t track my calories.  I’ve been soft on goal-setting.

I’m weighing again every morning and will be updating my weight page.  I may even start the progress photos again – even though I’ve gained weight and a few years.

I don’t believe food is the biggest issue right now.  I’ll need to watch what I eat, but in some ways, my eating isn’t bad at home.  I do poorly when I go out to eat, but Diane prefers we eat at home most days.  If I continue to gain weight I’ll start tracking calories again.

This is the big one.  I’ve dilly-dallied around this one.  I love beer.  Not just drinking it, but tasting it, talking about it, and trying new beer.  I’ve considered giving it up entirely.  Normally, just cutting back works for a while, then I slip back into old habits, so I need something new.

I’ve thought of something that will control my consumption, and allow me to further enjoy the beer.  Beer Tickets.  I’ve printed out a sheet of seven tickets – each good for one beer.  I get a new batch of tickets every Sunday.  The tickets expire that Saturday night so I can’t hoard them.

I can have one beer a day, or seven all at once for the week.  I’ll probably drink a couple a few nights a week.

How will I enjoy the beer more?  The tickets are mostly blank.  I write the name of the beer, where I had it, what I paid for it, and what I think about it.  I can review it later to determine what beers I prefer, or what I drink too much of, and tell me when it’s time to branch out.

If seven beers per week turns out to be too much, I’ll drop the number down.

This is the beginning of the year.  It is effective immediately.  I’ve had no beer today, so I have my seven tickets, but three are already crossed out due to the “partial week” so far this year.

I need more fast bike rides.  I generally plod along at a leisurely pace now.  That’s fine for getting to work, but I need to step it up to burn calories.  I need to get faster to feel better on longer rides.

I need to branch out and do some strength training.  Maybe Diane and I could do a little running.  These are not new ideas.  I’ve been trying for over six years now.

I’ve suffered with depression pretty badly over the last year.  In April I started an anti-depressant.  It worked for a while, then it didn’t.  I quit taking it.  I’ve since started taking a different one with mixed results.  I’m still taking it.  Cutting back on alcohol could be hugely helpful here.  Easing the depression helps me control overeating and drinking too much.

I’m in the habit of going out to eat and drink.  Diane and I need to build habits of doing healthy things together.  When we ride the tandem together, it’s usually to ride to a restaurant, bar, or party.  We need to change that.

I don’t know why we make changes with the new year.  Wouldn’t it make sense to do it on your birthday?  I dunno, but it’s time to change. 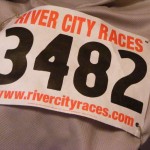 As part of my Triathlon training I ran a 5k this morning.  This is not only my first 5k, but my first organized run.  I met up with my training partner (Debbie) at the Frostbite 5k.

A week ago I was supposed to run a 4K. I didn’t even buy running shoes until two days before. I didn’t train at all. I was saved by bad weather. I didn’t run.

This past week I ran indoors at the YMCA. 1 mile, 3 times. Not a huge distance, but I did better than I thought I would. For some perspective, the last time I ran a mile, I was in high-school, and despite being lean and muscular I could barely breathe and almost vomited.

So today, I didn’t wimp out.  I even rode my bike to get there, which was a good idea due to lack of parking.  There were over 700 people running.

For the first 1.5 miles I kept up a good pace without walking. I think my first mile was about 11:30. After the halfway mark I did drop to a walk a couple of times to recover before getting back to a jog.

I saw a lot of Couch to 5K t-shirts. There were some icy spots on the road.

The ride home was at a leisurely pace. My legs are sore.

Some observations from a bicyclist point of view:

I don’t think I’ll ever become a regular runner, but I’ll do it enough to train for my Triathlon in late July.

I haven’t run a mile since high school.  Although I was lean and muscular at the time, I still remember feeling like I was going to lose a lung.

Today, in addition to swimming and weight-lifting, I took advantage of the indoor track at the Y.  I settled into a steady pace, and before I knew it, I had run a mile.  I felt fine.  I guess my cardiovascular system is stronger now than when I was in high school, even if I sag more now.  🙂

I have an appointment on Thursday morning with a “wellness coach” at the Y.  I basically just asked how to use the computer-fitness-tracking-thing (I can’t remember what it’s called), and had to schedule an appointment.

I’m really only doing strength training for my upper body, arms, and core.  I think my legs are doing  just fine from a few years of riding a bike.

I’m registered for today’s Reindeer Romp.  As far as I know, the race is still on, but I’m not going.

It’s 20 degrees and there’s snow everywhere.  I ride my bike in this stuff all the time, but dressing for a run is a bit different than for dressing on the bike.  I also don’t have a good way to carry extra layers while running, I do on a bike.

If it had been 10 degrees warmer I would be there.  Instead I’m going to enjoy some warm coffee and a book.