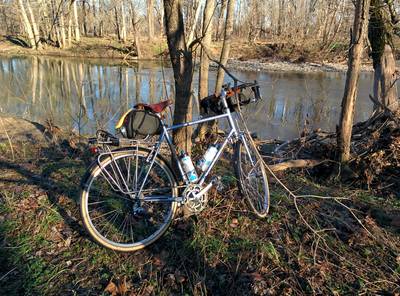 Shortly after leaving work on my bike today, I ran into Kirk Kandle.  He’s another bike-commuter, but he took it a step further and went car-free last month.

Recently, he’s been interviewing other “Invisible Bicyclists”.  He’s trying to call attention to distracted motorists who don’t notice us.  He’s also trying to show that bicycles aren’t just toys, but a valid method of transportation.  He does this while keeping a positive outlook.  I applaud him for that.

I recognized him, and went out of my way to talk to him.  He asked a few questions, and took a few pictures.  Expect to see me on his blog soon.

The city of Louisville was hosting the Bike to Work Day today.  I rode from my house in Charlestown to Seneca Park, then on to Fourth Street Live, and eventually to work.  During my lunch break I rode back down to Fourth Street Live for the festivities, and the disappointment of not winning anything in the drawings.  🙂

After work I headed straight home, as the return to Seneca would have been a bit pointless.  The festivities are already over.

The early part of the ride was incredibly nice.  There isn’t much traffic at 5:00, and the ride was peaceful and quiet, but dark.

After getting to Louisville I took Frankfort Avenue out to Stilz Avenue, and wound my way down to Seneca Park.

WAVE3 and WLKY both had news crews there.  WLKY interviewed me, and I’m quoted in the story, and make a brief appearance on the video.  WLKY was also taking video from a helicopter.  You can see me in the aerial footage also, because I stick out well on my ‘bent.

There was a photographer there who may have been with the Courier-Journal.

The weather through the day was perfect.  The forecasts had been calling for a chance of rain, but all morning and early afternoon was beautiful.

On the way home, still about five miles out, the skies opened up.  I rode the last five miles in a downpour.  This was my first “warm rain” of the season.  It was actually rather pleasant.  Some guy in a truck honked and made the “crazy gesture” at me.  I found that amusing and well worth getting wet.

I ended up with about 47 miles for the day.  Not bad for just a commuting day.

Tomorrow will be 62 miles for the Tour de Cure.  However, I am driving to that event.

I started this blog to document my weight loss, and publicly embarrass myself.  I knew people from work would see it.  Other than comments that I should wear more in the progress pictures, the comments at work have been positive.

A few weeks ago, I had a little media exposure, and that really got people at work talking.  Today, my company blogged about the TV spot featuring me.

I really feel bad now…. I didn’t ride my bike to work today.  I haven’t ridden to work yet this week.  Oh well, there are still three more days in the week.

The “exciting news” I alluded to in my last post is obvious now.  WAVE3 wanted to do a story on bicycle commuters, and they found me.  I really hate seeing myself in video, but I have to admit that this is cool.  I’m just glad that I’m in touch with my geek side, as this news piece really shows it.

See the video below.

Thank you for the comments and email that I’m still receiving.  I just got back home, and it will take me a while to read all of my email.

Damon asked what the bike costs.  That bike retails for $1300-$1400.  I’ve got quite a bit into accessories also.  However, a recumbent bike isn’t necessary for commuting.  I like it, but it’s probably not for everyone.  The bike I originally started commuting on was a $225 hybrid bike.

Whatever bike you use, I recommend a helmet and lights.

I don’t currently have a regular job.  I’m a freelancer working at a former employer.  I was out on Monday (I was quite sick), but was back in the office today.  News of this blog is spreading there, so it’s definitely time to make some progress.  If I don’t, the embarrassment will be for nothing.

There are a few other “fat guys” at the office, so at least I’m in good company.

I’m still not getting enough exercise, but my elliptical hasn’t arrived yet either.  I’m just lazy.