What a wonderful/busy/crazy/happy/stressful year it’s been. 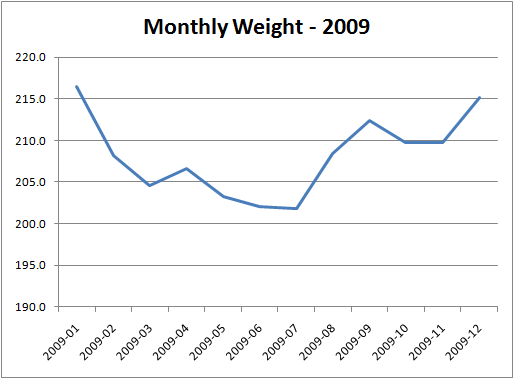 I (mostly) lost weight through the first half of the year, but mostly gained it all back in the last half.  I’m still happier with my weight than I was in 2007 or 2008 though.  I need to have the self-control that I did in 2008 again.

I’m happy with what I’ve done for the year.  I met a wonderful woman, fell in love, and got married.  Looking back at my posts from the past year, many of them seem rather negative.  I guess it’s easy to focus on the times when things aren’t going as planned.  Things usually don’t go as planned, but work out alright anyway.

That doesn’t mean I give myself a pass on not losing the weight and keeping it off.  I very much intend to achieve my goal weight of 175 lbs, and stay there.  I’m hoping I can do it before December of next year.

I’ve mentioned that my life has been a little crazy recently.  My work life got a lot crazier on Monday the 5th.  I still rode to work 4 days that week, and rode home 3.  I wimped out one day and got a ride.  I drove one day because I needed my truck.

The week starting on the 12th was a little crazier.  I still managed to ride to work and back 3 days.

Why could this affect my riding?

I’ve been so busy, I’ve been running and doing something from the moment I wake up, until I get to sleep at night.  Some of it is work, some of it is moving Kristy’s stuff, some of it is normal domestic crap.  Oh, yeah, Kristy is out of town, so she’s not here to help.  I’m not blaming her, she wishes she could be here.  I also have my younger teenage daughter living here and increasing the stress level.

On Monday I applied a software update that has led to a work-week-long pain in the @ss.  This coincided with two other screw-ups (one of which is partially my fault).

On top of this, I had to come up with a fat chunk of money for a lawyer.  I’ve got some legal issues to deal with.  It’s just a “family law” matter, nobody is in trouble or anything.  🙂

On the bright side, I will be done at the apartment tomorrow.  I’m going to try for a bike ride on Sunday.  I think I’m going to get back on the bike for full-time commuting again on Monday.

I don’t know who said it, but the phrase “Life is what happens when you’re busy making other plans” applies perfectly.

Kristy, my shiny new wife, has moved in.  Her job has transferred, and we can even do some car-pooling.

We’ve still got of stuff to move from her old apartment, but we’re getting to it.  Although we’re probably still going out to eat too often, we are splitting meals now which is better for the wallet and the gut.

I’ve worked three days this week.  On Wednesday I drove to work.  Thursday and Friday (today) I rode the bike into work, but Kristy picks me up after work.  That seems to work out well.

I’ve been riding Nermal.  Oria needs some work on the wheels, and should probably have the bearings cleaned and regreased after the sand and saltwater spray in Florida.

I am disappointed with my weight.  I’ve been above 210 lbs all of this month, and part of last.  I had been down below 198 as recently as July.

Kristy is supportive of my weight loss and bike riding.  She kicked me out of bed this morning so that I had time to ride.  I love her for that.  🙂

Kristy and I were married yesterday, 9/12/09.  The weather was wonderful, the sun came out just for us.

A few friends and family members gathered on the beach for the fun, relaxed ceremony.

We kept the ceremony simple (about as simple as driving to Florida can be). We had a reception at a local restaurant. We were surprised with a phenomenal beach-themed wedding cake.

Most of our honeymoon is actually a pre-wedding adventure. I’ll be back at work later in the week. It’s been a lot of fun, and I’ll have more pictures and stories to share.