As I mentioned, I intended to ride to work on Monday… and I did.  I took a reasonably sedate route at 15.7 miles.  Diane had volleyball later, so after work I rode to her sisters house (4 miles) only to find they had already left.  I rode to the volleyball location (2 more miles) and watched them play.

Diane had driven my car there, and it was late when we left, so I loaded my bike on the back and drove home.

The plan is still to ride three days a week.  I can work from home two days, which means not driving to work unless there are extenuating circumstances.  I worked from home today and yesterday.  I’ll be back on the bike in the morning.  It’s packed and ready now.

I do have to ride to the Middletown location tomorrow, which I don’t enjoy much.  Friday will be better, as I’ll be at Riverport.

After my March 5th mountain bike ride, I didn’t get on a bike again until Friday the 10th.  Part of it was I was still sore due to hitting the ground.  Most of it was laziness.

That Friday was another “work from the old office” day.  I prefer that commute to the new office.  I wanted to ride the single-speed, so I attached the only spare rack I had (a front rack), some lights, and rode to work. 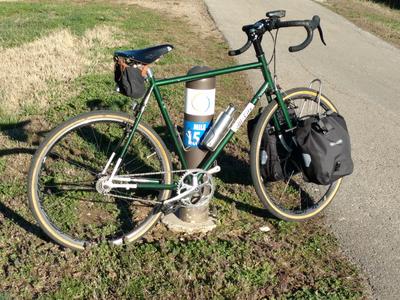 Unlike last time, I had no issues on either leg of the trip.  I did stop at a brewery on the way home.  My wife rode her bike there and met me, where we drank entirely too much.

The next day, Tim and I went mountain biking again.  This time we went to Waverly Park which has more “flow” and less rooty, rocky technical stuff. 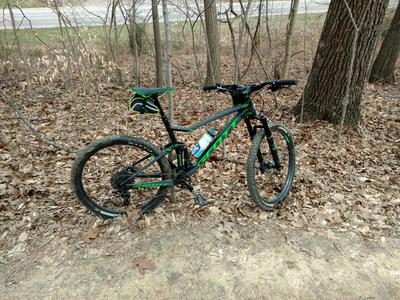 We used to have similar riding ability, but over the last few years, I’ve lost a lot of fitness and gained weight.  Rather than hold him back, it was agreed we’d each ride our own pace.  So he went ahead, and we regrouped at the car later. 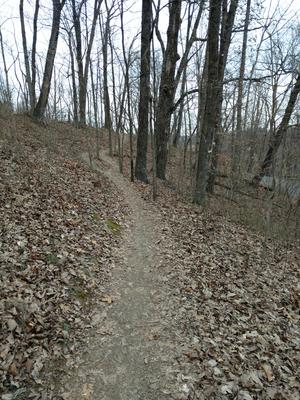 I had a slow ride, but it was pleasant, and I didn’t crash this time.  That’s always good thing.

So, it’s now been eight days, and I haven’t been on the bike since.  Why?  Laziness mostly.  I really need to start getting around by bike a lot more.  I’m planning on riding to work tomorrow, even though it’s the “new office” that I don’t riding to as much.

I’m also really enjoying the single-speed as a commuter.  I didn’t want to add racks. lights, fenders, etc, but I might make some concessions to utility.  I bought the Disc Trucker for that kind of use, but I don’t enjoy that bike as much.

If loading-up the single-speed gets me to ride more often, then that’s what I’m going to do.

On Sunday, I met up with Tim for a quick slog though Cherokee Park.  Riding the full-suspension Scott with it’s aggressive position leaves me sore, so I had it at the shop last week for some riser bars.

Riding the Scott through town to get there was fine.  Once on the trails, my lack of fitness was very evident.  I’m in worse shape than since before I started riding.

I’m also not a great mountain biker, and I fell once.  I wasn’t injured, but I’m still sore and I kinked a cable on the bike.

Once the ride was over, Tim and I spent some time over beer, discussing my lack of fitness (the beer isn’t helping).

Luckily, I had brought small lights with me, as it was dark before I headed home.

I worked from home yesterday and today.  I’ll be in the office tomorrow, but I’m not sure what the chances of riding the bike to work are.  I still hurt.