Last Wednesday, I realized time was running out before I start my new job and have to go back to the daily grind.  I posted on G+ asking about locals for an overnight bike camping trip.  Nobody was very certain of availability.  So I improvised and whipped out a quick 5-day plan of about 250 miles.  I’d ride alone if necessary.  I had just a couple of hours to plan and pack.  Diane was flabbergasted.

After a trip to the ATM on my loaded recumbent bike, I headed north.  I detoured around some of the bridge construction mess, and eventually crossed into Indiana on the Big Four Bridge. 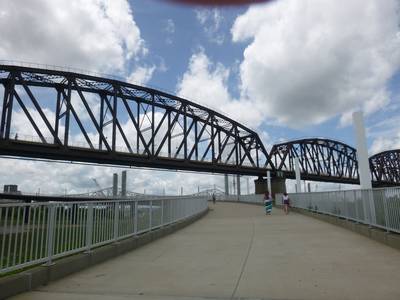 I noticed the cables for the new downtown bridge are partially done. 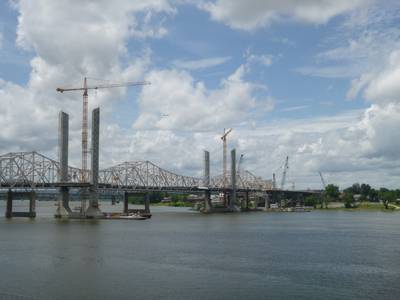 I cruised through Jeffersonville without stopping by Flat 12 for a beer.  I continued up to Utica, where I could see the progress on the new east-end bridge. 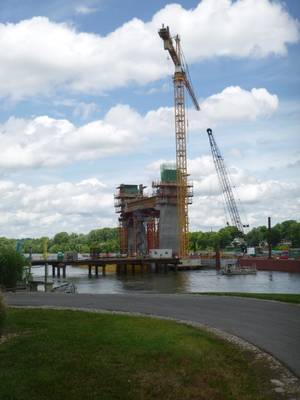 I continued to Charlestown, where I did have a beer, a half-sandwich, spinach salad, and copious amounts of water at Charlestown Pizza.  I probably had too much of something.  I felt “sloshy” while leaving.  Ugh. 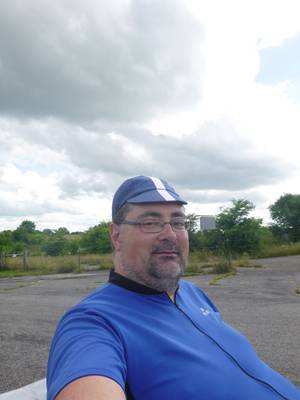 Shortly after leaving town, the rain started.  I don’t mind riding in the rain.  The glasses making it hard to see does bother me.

At this point I had to deal with hills.  Oh well.  I’m fat and old.  I’m attempting my longest (in days) tour while being at my fattest and most out-of-shape since I got a bike.  I went slow.  I walked up hills when I had too.

The rain stopped after an hour or so.  The roads were gorgeous. 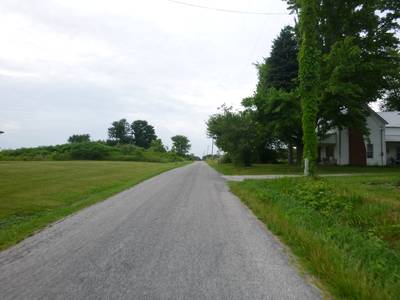 I made it to Clifty Falls State Park after sunset.  I paid the fee, set up my tent, and went in to take a shower in the nice facility their just as a torrential downpour began.  It rained a lot Wednesday night.

I slept poorly.  It was hot and muggy in the tent, but I couldn’t open the rainfly due to rain.  I couldn’t leave the tent due to bugs (I had already washed off the bug repellent in the shower).  I read my Kindle for a while.  I think I finally fell asleep at 3:30 am or so.

I woke surprisingly late at 9:00 am.  I can’t normally do that while camping.  I unzipped the tent to a pleasant day, and my ‘bent leaning against the picnic table. 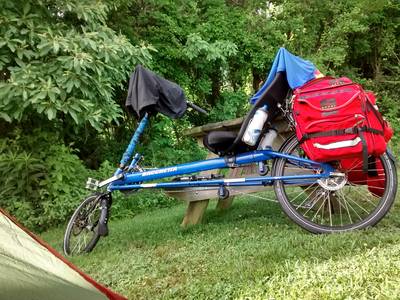 Timothy contacted me about meeting up at Hardy Lake, where I already had plans to swim.  I packed up and headed out. 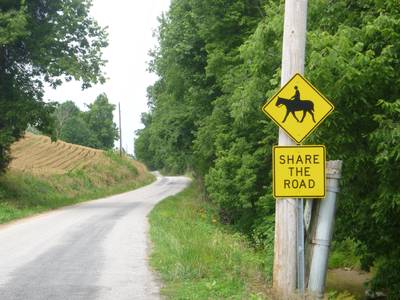 Weather was a bit mixed, and this was probably my slowest day on the bike.  I was a bit stressed, getting sunburned, and trying not to make Timothy wait too long.

Due to spotty cell coverage, my conversation with Timothy was difficult.  I rolled into Hardy Lake, down to the beach, and took a swim with my waterproof camera.  I didn’t see Timothy. 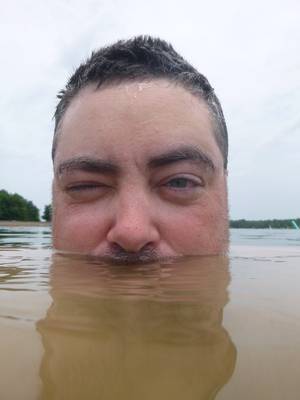 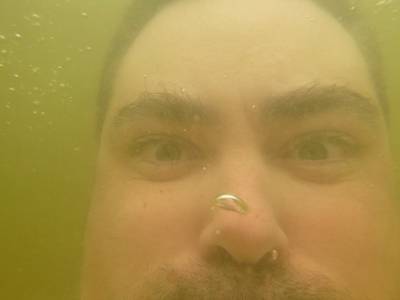 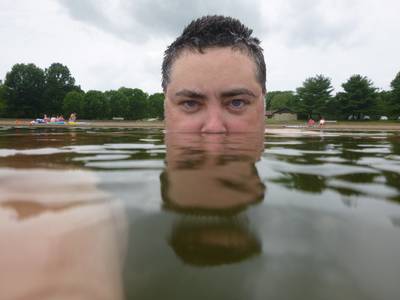 Just as I was leaving the water, Timothy came rolling up on his bike.  He had apparently been at the park for a couple of hours, but missed the beach.  He was down at the boat launch enjoying the view.

We rolled out.  Our destination was Delaney Park, which I believe is a county park nestled into the hills of Jackson-Washington State Forest. 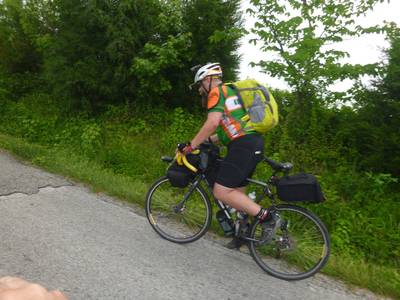 It was hot, then it rained.  I was slow.  I complained.  I think Timothy pulled ahead to avoid hearing my complaining.

We rode a little gravel.  We rode a few hills. 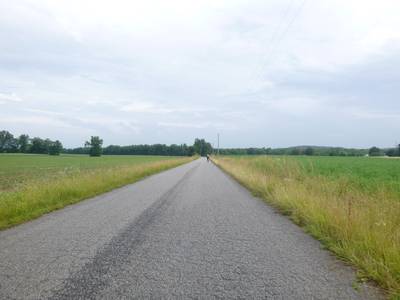 I needed food and more caffeine.  We stopped at a Subway restaurant in Crothersville (where I stopped in a 2011 tour also).  In the 2011 tour, I went into that Subway to hide from a storm, and ate while I was there.  This time, I went there to eat, and ended up waiting out a storm. 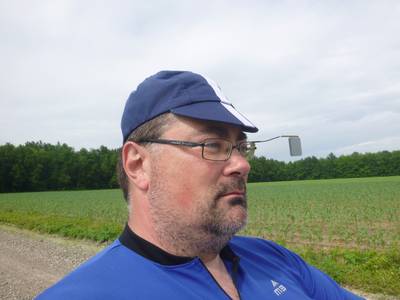 The second half of the day was mostly flatter terrain.  We were in ancient river valleys between “knobs”.  As we approached the park, bigger hills were visible, but our path took us around them. 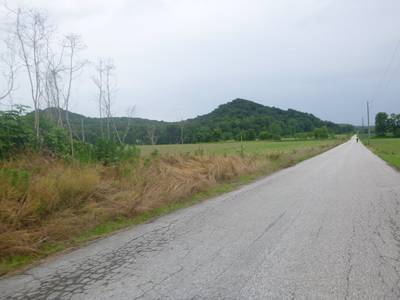 I had been under the impression that Delaney Park was private, but I now believe it’s a county park.

We arrived, set up camp, and were immediately set upon by a severe thunderstorm.  It had scary-strong winds.  We took shelter in the laundry area of the laundry/restroom building.  It appeared to be a sturdy block building.

The winds passed, and we wandered about, watching the deluge flood down the hills and eventually into the lake.  Surprisingly, both tents and bikes were right where we had left them.  Timothy’s was fairly dry.  Mine was soaking wet. 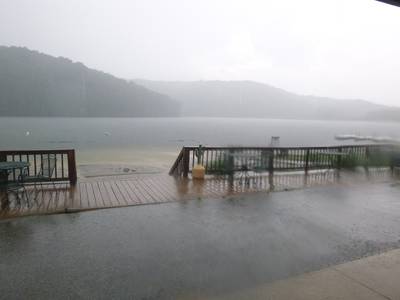 I didn’t have real food with me, and had intended to eat at the restaurant in the park – which was closed.  Timothy saved the day with camp food.

After eating, we settled in for the night.  The rain had tapered off.  I wan’t able to fall asleep easily, so kept the rain fly open on one side to watch the lightning bugs flicker in the stand of trees a ways a way.  It was hypnotic.

I’d like to say I fell asleep in that bliss.  I did not.  The “residents” who have full-time sites there were loud and boisterous.  There was a very loud strange bird flying from tree to tree.  The frogs were very vocal – including one very close to my tent.

Eventually things quieted down, but the rain started again.  I closed the rain fly, and fell asleep eventually.

I woke at about 5:30 am.  It was raining.  My tent was dripping on me.  Packing up in the rain is difficult.  Timothy was still asleep.  I tried to go back to sleep.  I considered the absurdity of camping in the rain, of bike touring, of many of my life’s choices.  I was unhappy.

Then, at 7:00, the rain just stopped.  That’s my cue.  I got out of the tent and quickly started packing.

We made coffee and more camp meals, and headed out.  Salem was our immediate destination for a more substantial breakfast.

There was one brutal climb on the way that I walked most of.  The rain did not hold off.  Often there was just a drizzle.  A few times it was a downpour.  We took shelter under a tree briefly. 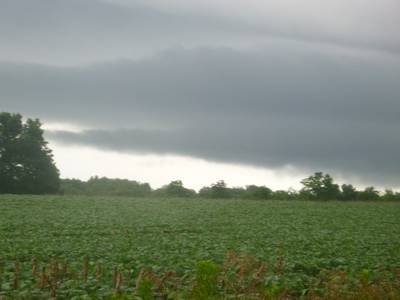 We arrived in Salem looking for a breakfast place I had been before.  Apparently they don’t exist anymore.  The best we got was excellent doughnuts and mediocre coffee.

Our destination was Spring Mill State Park, which is just a short distance from the town of Mitchell.  Timothy thought that heading to Mitchell first for a substantial meal would be a good idea.  I agreed, and off we went.

I had already scoped out The Hub Restaurant online before the trip.  It’s a simple, family restaurant, but the staff was friendly and the food was good.

While there, more weather warnings were issued.  My gear was pretty wet.  I suggested we skip the camping and go across the street to the Mitchell Motel.  Once checked in, and had our bikes secured, we walked to the local liquor store for a six pack of beer to share.

I woke with the 7:00 am alarm.  We were packed, check out of the motel, and across the street at the restaurant again for breakfast when they opened at 8:00.

After a hearty breakfast, we headed out.

It had rained all night and most of the morning.  There flood warnings scattered around the area.

My planned goal was Buffalo Trace Park in Palmyra.  Timothy was going to ride with me, then ride home.  He was going to have a much longer ride than I.

I was really struggling to keep moving.  I was having knee pain.  I was wet and miserable.  Along Vincennes Trail there was high water across the road.  We consulted the GPS, and took an alternate route. 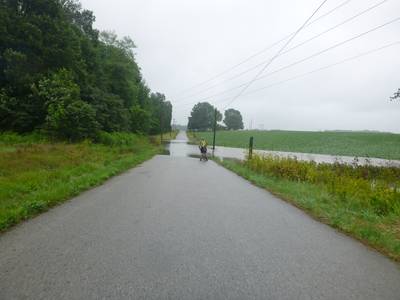 We made another short detour to visit Beck’s Mill.  It’s an operational water-powered mill.  Timothy wanted to buy a bag of grits.  Apparently they can’t operate with flooding and were closed. 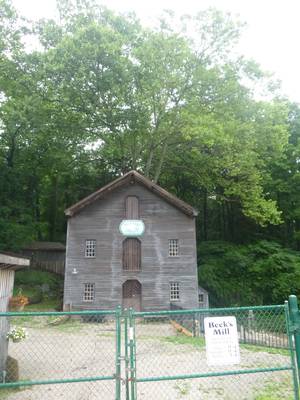 We continued further along Vincennes Trail.  We came across another, longer, deeper flooded stretch.  It didn’t look good.  There wasn’t an alternate route that wouldn’t add significant mileage.  It wasn’t flowing water, so it was safe.  It was a matter of submerging parts of the bike that shouldn’t be submerged.  We decided to try to carry our loaded bikes the distance.  Neither one of us managed, and instead set the bikes down, and pushed across. 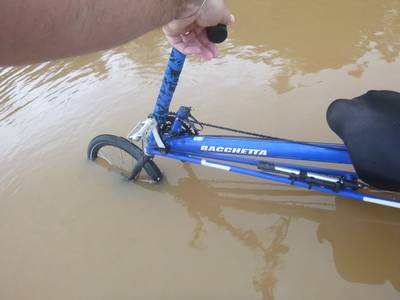 Yes, both my hubs were submerged.  Timothy had the same problem, along with his bottom bracket.  The lower part of my panniers were also dragging in the water.  It was a long slog down the road before it wasn’t underwater.

At this point, I knew the tour was over.  I was too sore, too tired, and would need extra time to clean and fix the bike at home.  We continued to Palmyra, found a diner, and I called my wife to come pick me up. 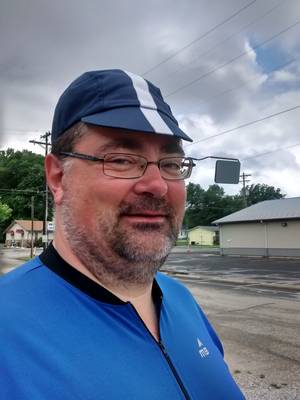