Yes, I’ve been getting restless.  I’ve been allowed to do a little work from home, but sitting up with my leg propped is not exactly comfortable.

Last night, I really wanted to go out for a beer.  I also wanted some exercise so I didn’t want to take the car.

I used the crutches to get down the back steps.  This is a white-knuckle experience for me.  I’m lousy with crutches and the stairs have no rail.  I joked with Diane about wearing my bike helmet for the steps.

Once down, I got in the wheelchair.  The weather has been bad.  The roads and sidewalks were covered with ice and snow.  Taking the wheelchair was safe – I wasn’t going to fall.  Diane did fall once on the ice, but wasn’t hurt.

It was slow going. I pushed myself along until I got stuck, then Diane would give me a push.  I did most of the work, but I was traveling at less than a walking pace.

Once at Four Pegs, Diane handed me the crutches she’d been carrying for me, and I made my way in the door.  We had several beers (to hell with the beer tickets for now).

The return trip seemed to go faster.  I slept really well last night due to exhaustion and alcohol.  This was my first good night’s sleep since the surgery.

I do need to stay off that bad leg for months.  I need a better solution for getting around.  I found something that will go over mixed-terrain a bit better.  It’ll be more fun.  I ordered it today, and I should get it next week. 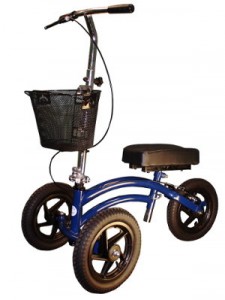 This is not an insurance-provided device.  I’m paying out of pocket for it.  I figure I’ll use it until I don’t need it, then I’ll sell it.

This will make it possible to “walk” longer distances.  I could even go all the way to work on it.  I could avoid the bus, or car-pooling.

I’m going to be silly and put lights and a bell on it.  🙂

One thought on “Mobility”