I was supposed to go camping last night with two other guys.  We were all going to ride our bikes to Jefferson Memorial Forest, which came out to a mere 16 miles for me, a bit more for Asher, and Timothy was planning 50 miles to get there.

I spent Thursday evening packing the gear.  The new sleeping bag and pad pack quite a bit smaller than what I had before.  I found I could put the pad and bag on the small front rack of the rSogn.  Everything else would fit in a single Arkel pannier.

I woke up yesterday morning not feeling well.  Well enough to ride to work, but it was cold and windy, and the whole camping thing just didn’t appeal to me.  I figured I would fee better later, and just tough it out.

I decided to ride the rSogn to work, with the camping load.  I squeezed the laptop in, and headed out.

I didn’t make it far.  The defective shifter gave up the ghost and wouldn’t stay in gear.  I turned around, and headed home.  I swapped out pedals on the Fargo so I could use my normal shoes, and moved my laptop over to that bike, and went to work.

Throughout the day it remained cold and windy .  It didn’t take much to convince the other two to save the camping trip for another time.  We’re tentatively planning on January now, which will hopefully allow Tim and Patrick to attend.

Oddly enough, the wind had died down by evening, and the camping trip probably would have been tolerable.  Probably.

The Woodchipper bars that came on the Fargo just weren’t cutting it for me.  Riding in the drops would hurt my wrists.  Patrick gave me a set of bars that he had tried on his Fargo. They were too narrow for his huge size.  He had also hit his knees on the bar-end shifters, so he cut the bars a bit shorter.

I installed them on my Fargo a few days ago.

My short test ride was fine.  I liked them.

Riding a bit farther to work and back yesterday, well, they’re too narrow for me also.  I also don’t like the odd shape of the tubing at the tops.  That’s a feature that’s supposed to make them more comfortable, but it wasn’t for me.  I’ll need to buy a different set of bars.

On the way home from work, I stopped and bought another shift cable, so I can swap out the shifter on the rSogn.  That’s on my to-do list for today.

It’s warm and cozy here at home.  I’m drinking good coffee (a gift – more on that later).  Going outside in the cold, even on a nice-looking day like today, for a bike ride just isn’t appealing to me.  I know I need to ride.  I need to get some miles is, lose some weight, and train for longer and faster riding.  Maybe tomorrow, maybe.

I’ll leave you with a picture of the new sticker on the Big Dummy. 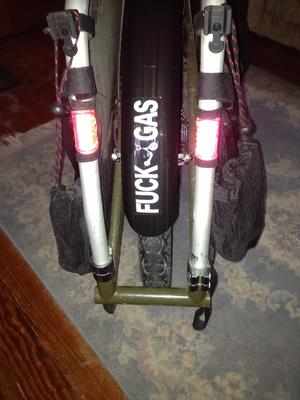