Last Friday I rode out to Parkside Bikes after work for the Light Up Alley Cat put on by Bicycling for Louisville.  I was riding the rSogn.  I had my commuting load, including my laptop.

An alley cat is generally a race put on by bike messengers.  There are checkpoints to go to, usually requiring proof that you were there.  The routing is totally your choice.  Alley cats often involve unsafe riding.

This one was different.  Louisville doesn’t have many bike messengers.  This was less race, and more fun ride with activities.  The checkpoints were:

I hadn’t been at Parkside it quite some time.  They have a bigger shop now, and carry Linus city bikes.

Turnout was about 50 people.  Extra bike parking was supplied at Parkside.

Some of the bikes were well-decorated.  I didn’t bother with Christmas lights this year.  I wish I had. 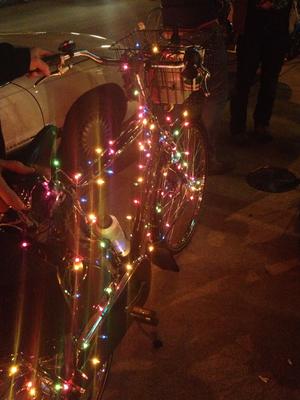 There was a minority of people who truly wanted to race.  They took off first.  Once that group had cleared, I headed out alone.  I wanted to ride with a group, but I didn’t want to race, or wait around any longer.

At the first stop, an unmanned candy stop, I met up with a group on mountain bikes.  I rode with them for a while.  The guy leading the group took us on a shortcut through mountain bike trails in Cherokee Park.  I was riding my brevet bike and carrying a laptop.  It wasn’t ideal, but I kept up and didn’t wreck.

I followed them up the steep, brick, Peterson Dr. to our next stop.  They left quickly, I finished my hot chocolate.  I managed to catch them along Frankfort Ave, but they started filtering through traffic and running lights.  I wanted nothing to do with that, so I hung back.

Another group came up on me.  They were college-age and not very bike savvy.  They also didn’t know the streets very well.  They were more than happy to let me lead.  We stopped at a store for peanut butter that we would need later.  We continued on to the Chubby Bunny contest, then to the downtown bar with the videogame.  I quickly beat the first level, and was back with the mountain bike crew.

We continued to Old Louisville for photographs under the mistletoe.  There was nobody I wanted to kiss.  This was the one stop where the bikes were brought inside.  It was a neat  little place.

Onward to my part of town where struggled a bit to find Jake’s house.  We eventually did, and dropped off peanut butter.  Then to Jimmy’s house to sing Christmas Carols.  There was a large group there, and we all were leaving at the same time.  Most were going to skip the last stop – an unmanned candy stop.  One of the women from the mountain bike crew and I were the only two that went there from the group at Jimmy’s.

We then headed back north to The Monkey Wrench.  I had a few beers and some food.  Because none of my good friends were there, I basically meandered around temporarily joining different groups for a short while, then moving on.

As things were winding down, I was talking to Jimmy.  He mentioned going to a nearby bar to meet up with his girlfriend.  We both rode there, and things got fuzzy for me.

I generally drink beer.  For some unknown reason I did shots.  I don’t how many.  I also continued to drink beer, but I have no idea what beers I drank at the second bar.  I have no idea how much money I spent there (although I know Jimmy’s girlfriend paid for one round of shots, and I paid for at least one).  I do know by the time I made it home, I had a lot less cash than I started with.  I’m glad I don’t generally carry more cash than I can afford to lose.

As I was leaving the bar I thought I was fine.  I carried my bike down stairs with no issue.  Once at street-level, it quickly became apparent I wasn’t going to ride my bike home.  Somebody, I have no idea who, said they’d take me home.  They put my bike in the back of their car, I crawled in and gave them my address.  My GPS mounted to the handlebars was tracking us as we continued on.

My memory and the GPS don’t agree on what happened.  They didn’t know where I lived. They knew what part of town it was and drove around a bit.  I remember being dropped off  on Ellison Ave.  I was feeling sick, and told them so.  I told them I could walk home.

The GPS track shows we were not on Ellison Ave, but in front of the Nachbar (which I’ve never visited).

I fell asleep for probably 30 minutes (based on GPS track) before a passing motorist and his wife saw me on the side of the road and thought maybe I was hit by a car.  They woke me up.  After talking with me for a bit, they called a cab for me and tried to give me money.  I waved the money off, as I had my own.

I think I dozed again waiting for the cab, but the couple was still there with me when the cab arrived.  Luckily, I had finished puking by the time the cab got there.  I was still really drunk, but felt better.

They loaded my bike into the trunk of the cab, and the driver took me home.

I woke up Saturday morning with the worst hangover I’ve had in many years.  I cursed my stupidity many times.  To add insult to injury, Sandy, my brown psychodog, got sick and was making messes all over the house.

I still had my wallet, phone, bike, GPS, keys, laptop, and some cash, just much less cash than expected.  For all I know I was throwing money at people.

Nothing was damaged, other than some scrapes on the skewer on my rear wheel.  I think this was from dropping the bike, when I realized I couldn’t ride it, or it may have been when I laid down in the grass.  I don’t really know.

I’m thankful for the helpful couple that called a cab for me.  I’m glad they found me instead of the police or someone wanting to rob me.

Yes, I had given up beer for a while.  This was a hell of a way to come back to it.  The beer wasn’t really the issue though.  The real issue was the hard liquor.

I’ve had enough of this kind of stupidity.  I’m still going to keep beer consumption under control.  I’m also cutting out hard liquor.  Even in small amounts, it tends to give me a hangover the next day.  At least I only had a hangover instead of a legal issue.  I’m glad I recognized I couldn’t ride my bike.  However, I’d gotten to the point when walking, even when leaning on the bike, wasn’t working.