An S24O is a sub 24 hour overnight bike camping trip.  Tim, Patrick, and I took off Friday evening after dinner to go to Jefferson Memorial Forest.

I did the same thing, with a similar group back in February, but I was quite uncomfortable last time due to a neck flare-up and not being equipped for the cold.

I packed up the Big Dummy and headed out to meet the other two.  I carried minimal clothing, despite the chance of rain.  The temperature was mild, but not really cool.  I packed a soft-sided cooler with a growler of Atomic Dust from Apocalypse Brew Works.

I didn’t yet have a rear rack on my Fargo, so I used the Big Dummy.

This is Tim’s latest machine.  It’s a Rawland Sogn.  I really like the color.

Patrick has his Fargo set up for touring.

It was getting dark by the time we were heading out.  I had the best lights, so I usually stayed behind to act as a “bumper” to keep us visible, or at least take the first hit from a car.  It was Friday night and we travelled busy roads.

The decision to take the main roads (New Cut Rd in particular) was that there would be better sight lines for us to be seen.  They are straight, mostly flat roads to get out of town on.  Being multi-lane, we could easily take the right lane and not hold up traffic.

We stopped at a convenience store for snacks, and I grabbed a package of Red Solo Cups for the beer, and for giggles.

After getting off the main roads, wandering up to the park office to get the paperwork, then climbing Holsclaw Hill (which I pushed my bike up most of it), we rolled up to the campsite.  Tim had arranged for the site.  He paid the fee (Patrick and I reimbursed him our portions).    Yet there was already a tent in our spot.

Upon approaching, a young man popped out, and after some gesturing we figured out he was deaf.  After some awkward “conversation” on paper, we determined he had squatted there.  We just wanted him to move over to where his car was.  It was less than 30 feet away, and still technically in our site, but he was reluctant to do so.  He seemed to get emotional, but eventually pulled his tent over by his car.  He was a quiet neighbor.

It was dark, so we struggled to set up our tents by headlight.  Once set up, Patrick had fire duty.

At that point, it was just three guys camping.  We talked shit.  We drank a little.  We (Tim) farted a lot. 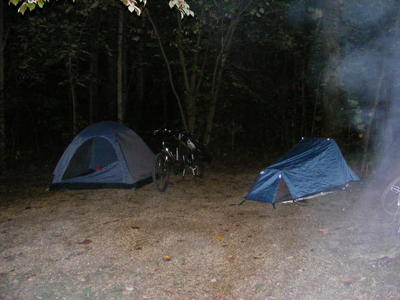 Being old farts, we soon climbed into our tents and went to sleep.

There had been a chance of rain all day Friday, Friday night, and Saturday.  During the night, it didn’t rain.  Although the temperatures dropped into the 50s, I was comfortable curled up in my sleeping bag.

I didn’t sleep well.  I usually don’t while camping.  Whether it’s noises of critters (two or four-legged), the hard ground, or my cramped tent, I tend to wake up a lot.  At least I didn’t wake up cold each time, as had happened in February.

We rose at about 6:45am.  Patrick made coffee (he’s so domestic!) while we packed.  It was quite cool.  I had some warmer clothes i could put over my bike clothes, but they weren’t good for riding in.  They were fine for staying warm while packing.

Stuff packed, coffee consumed, we rolled out.  Once we hit the road, we had a nice fast downhill (the one I had walked up the night before).  I was back to wearing only shorts, short-sleeve shirt, socks, and sandals.  I didn’t even have gloves.

I knew I’d be cold.  I was right.  The 30mph descent was absolutely frigid, but it only lasted a few minutes until we got to flat ground, slowed down, and had to pedal.  Within a few more minutes, I had warmed up and was comfortable.  I still saw no sign of rain.

We took a similar route back to the start location of the night before.  Being fairly early in the morning, traffic was lighter.

We arrived at Twig and Leaf for a hearty breakfast and more coffee.  We then parted ways.

While riding home after breakfast, it had gotten cloudier and the temperature had dropped again.  There was an extremely light mist.  The short ride home was rather chilly.

Tim wrote up rather flippant remarks about the trip here.  I like when he writes like this, even when he makes fun of me, as in the quote “Dave walked, as expected.”

This is Friday’s route:

This is Saturday’s route:

I was really glad to have the opportunity to do this trip.  It was short, but yet packed in quite a bit of fun.

The total mileage is actually more than what is shown here, as I rode to and from the ride start.  I also ran errands before the trip to get beer and other supplies.

I still need some better camping gear.  I want a tent that packs down smaller, yet is longer so that I can stretch out.  I need a warmer sleeping bag.  My current gear is more than 12 years old.  Tim suggested I could not drink beer for a week and buy the camping gear.  That’s only a slight exaggeration.

3 thoughts on “S24O or Quickie Overnight”