I had a busy day.  I had to take the Big Dummy to the bike shop after work.  I needed transportation after dropping it off, so I rode the Big Dummy to work, towing the single-speed.  I’ve often called my Big Dummy a gravel truck.  It was more of a tow truck today.

Riding the bike like this was fine.  It handled better than expected.  Moving it around while not riding it was problematic.  When I got to work, I had to leave it in the hallway.  I also couldn’t turn it around, so at the end of the day I went out a different set of doors.

I rode this contraption to On Your Left Cycles and unhooked the bikes.  I dropped off the Dummy and rode the single-speed to Popalino’s Pizza for Car-Free Happy Hour.

There was a chance of strong storms around 5:00pm, but they never materialized.  We just had light rain.  That seems to have scared off some of the CFHH crew, as there were only about ten of us there this time.

Tomorrow is my birthday.  I have plans to spend time with Robin and my daughter.  Robin surprised me by having a cake at Popalino’s when I got there. She had other plans for the evening and couldn’t be there.  The cake was a really nice touch. 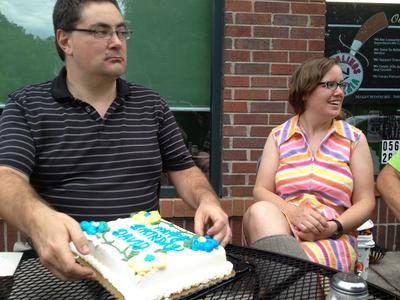 After things wrapped up, I headed home, but had to stop at the gas station… for a picture.