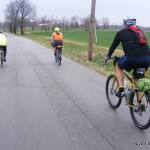 Four of us got together for the RCCS Gravel Wander/Training out of New Washington today.  It was partially just because we enjoy gravel and partially to train and judge our ability for the Gravel Grovel that is only six days away.

The weather started out in the mid-50s, a tad warmer than expected with heavy overcast skies.  It had rained overnight and the roads were wet.

Patrick was riding his new Salsa Fargo, Timothy his new Origin8 29er, Tim was riding his Cross Check, and I was riding my LHT.  So, two disc-brake mountain bikes, and two “road” bikes with cantilever brakes.

We headed northwest out of New Washington on lightly traveled roads.  It was quite nice.  We did stop to adjust clothing early in the ride as we had overdressed.

On Concord Rd was this interesting concrete railroad bridge.  There are no longer tracks on it.  It was built as part of the Marble Hill Nuclear Plant project to bring construction material in by rail. 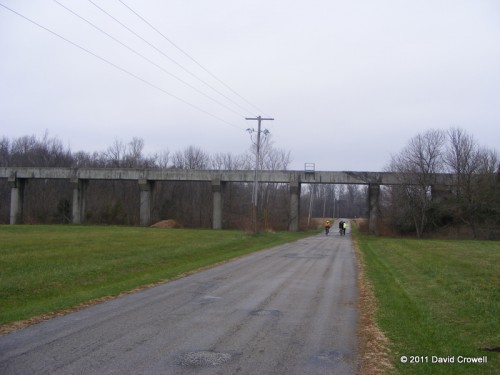 Shortly after the bridge, we turned on Arbuckle Rd, a nice stretch of gravel.  I wasn’t feeling strong and my speed dropped in the gravel.

After a while, Timothy and I were riding together while Patrick and Tim were further ahead.  As we neared a left turn on the route, Tim and Patrick continued straight.  We yelled for them, but they couldn’t hear us.  We waited a bit but they disappeared from sight.  The “left turn” took us through a gate on to two-track and I thought this was the “mud pit” road I had ridden with Tim in August of last year.

Timothy and I rode down the two-track, figuring we’d meet up with the other two later.  We passed a parked Jeep and continued.  The two-track opened up into a cornfield.  The corn had been harvested leaving 3-inch stalk sticking out of the ground.  We made our way in the general direction of the “road” according to the GPS, but it was veering out of the field into thick underbrush.  We eventually decided that this was not the “mud pit” road and turned around and went back.

While exiting back on to the road, a hunter with a large rifle approached us and asked what we were doing.  He was worried we were messing with his Jeep.  He was actually friendly once he figured out we were not messing with anything.

I talked to Patrick on the phone, and he said they’d meet us at Hutch Rd.  We detoured around the “not road” marked by Google and my GPS as S 900 W.

We made our way to W 500 S and the GPS track for Hutch Rd had us turning left… into a driveway.  Tim and Patrick were not there.  I checked my phone, and there was a text saying they would meet us at the north end of Hutch Rd.  Timothy did not seem eager to ride on private property after the encounter with the hunter.  We detoured around Hutch Rd, but did not see Tim or Patrick where Hutch Rd intersected with S 850 W either.

We continued on for several miles.  Eventually I noticed Tim and Patrick behind us.  They apparently had been chasing us for some distance after seeing my tail light from a distance.  I also found out from Tim that Hutch Rd was the “mud pit” road from last year.  We missed out on that.

We meandered north toward roads Timothy had found while planning the route for the Charlestown Populaire.  Once getting north of Deputy Pike, these were some of the best gravel roads of the day.

I was forcing myself to eat and drink at this point.  I wasn’t hungry or thirsty, but I knew I’d bonk if I didn’t get things down.  I still felt okay though. 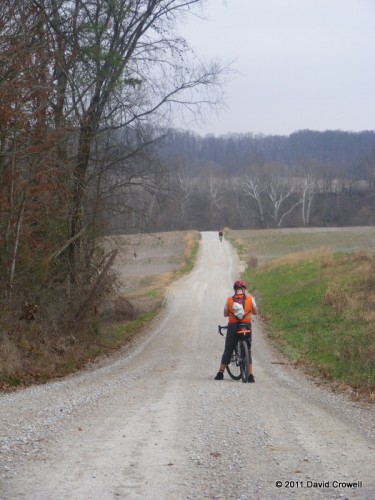 It was shortly after this picture was taken, at about mile 28 or 29 that the rain started.  It was a light misting rain.  It persisted for the rest of the ride and made balancing temperature more difficult. 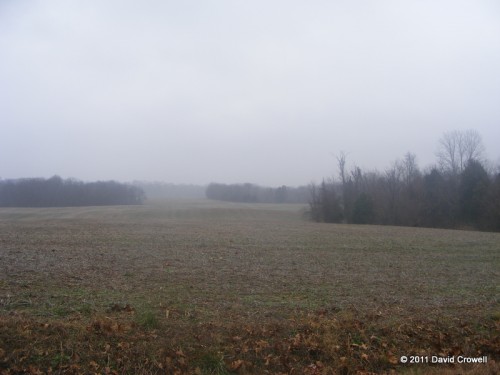 This area was near a small branch of the Muscatatuck River.  We’ve ridden near/over this river many times, just not near here. 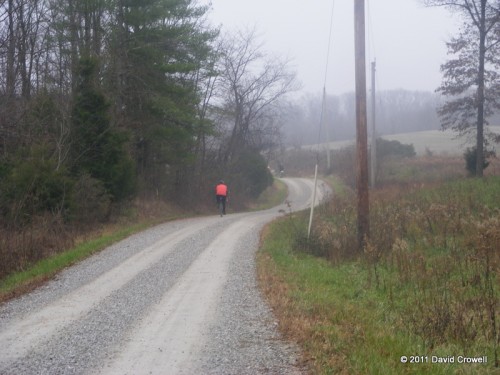 We meanders southeast for a while, eventually coming to the town of Hanover, our lunch stop.  We hadn’t researched where to eat, but Hanover has a few places.  Between the GPS devices and smartphones we had, we quickly found Jendy’s Pizza that was only a quarter mile away from where we pulled over to discuss options.  We continued to Jendy’s and walked in quite soggy.

The bad part about a lunch break on a cold, wet ride is that you get colder.  Getting back on the bike was hard.  I really wanted someplace warm to curl up and sleep.

We left Hanover descending a steep downhill toward the river.  It was raining a bit harder now.  Tim and I, with out cantilever breaks, were riding the brakes down the hill to keep them dry enough to function.  Timothy and Patrick were enjoying their disc brakes.  All of us were freezing.  A fast downhill without a chance to warm up first made things quite uncomfortable.

We were heading for River Bottom Rd.  The northern part of the road near Hanover is gravel, yet I’ve never ridden that section.  Eventually a sign marked “Road Closed – Travel at your own risk” and the pavement ended.  That was different!

This gravel was large chunky stuff.  It was tough going.  Hit a rock wrong and the bars would try to twist out of your grip.  There were also large black rocks stacked off the side of the road that looked like coal.  I didn’t stop to inspect it, I wanted to keep moving to stay warm.

As we were now down in the river valley, the river was to our left, and hills to our right.  Low clouds were rolling in just over our heads, obscuring some of the hills.  It was surreal, like something out of a movie. 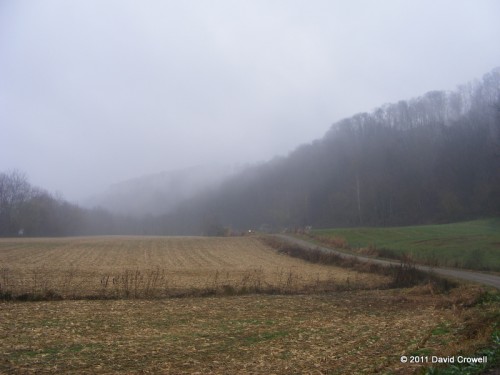 This picture doesn’t do it justice.

Eventually the pavement began again and before long we were on a steep climb on a smoothly paved road – W Prospect Rd.  I was glad for my low gears as I slowly spun up the climb.

We were all very tired by this point.  There was still much gravel.  I can’t remember which roads were gravel, and which weren’t but we still had plenty of gravel.

There was one small loop off of paved road that I had originally planned to ride, as it was extra gravel on those three roads.  We all decided to skip it and moved on.  There was still more gravel.

Somewhere around Taflinger Rd the gravel ended and we were on the home stretch.  We rolled New Washington – Bethlehem Rd into town and back to the cars.

Tim drove me home, but we stopped for coffee on the way.  Once I was home I hopped in the bathtub full of hot water.  I was chilled to the bone, and that seemed the best remedy.  I stayed in the tub for a while reading, until the water started to cool.

Next Saturday is the Gravel Grovel, and I’m about as ready as I’m going to be for it.  I’m fairly certain, barring calamity, that we can make the eight-hour cutoff.  I’m optimistic that we can finish in six and half hours, allowing us to see the awards ceremony.

I’m also fairly certain that my mileage for the month will be quite nice!