I still have two months left in the year, but I’ve had four months with more than 500 miles each.  That’s better than I’ve done in previous years.

My overall mileage year-to-date is a bit lower than last year, but that’s due to my horrible June because of my neck. 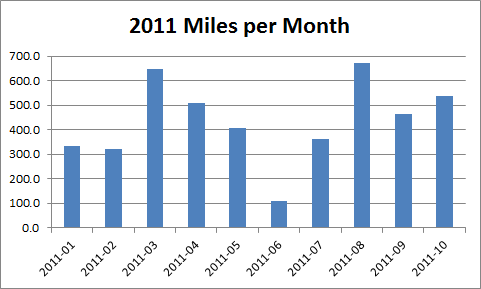 I mentioned in my previous post that I’ve driven the truck to a ride for the last time.  It’s true.  It’ll be sold by Saturday.  I will be officially car-free.

I was car-free briefly in April 2009, but then I bought the truck.  I lived in Charlestown and the time, and the time and energy spent commuting that distance was more than I could handle.

Now, I live in town, and this car-free episode isn’t being forced on me.  The Kia needed a new engine, spurring that car-free stint.