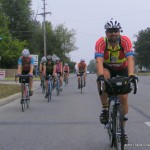 Today was the third LBC Populaire.  Timothy has pitched the idea for these rides, and I attended the first one in July.  I skipped the August one due to other commitments, but I was back today.

Today’s ride was advertised as flat enough to be fixie-friendly.  So I prepared my single-speed.

The ride started and ended at Charlestown Pizza Company.  I drove to Charlestown and parked at my old house to ease the parking situation.  I then rode my bike to the ride start.

The weather forecast was calling for thunderstorms, but at this point we just had overcast skies.

I think there were nine of us, all LBC members.  Two of the nine had recently returned from Paris-Brest-Paris.  What was I getting myself into?

We headed out of town with probably a 17mph average.  I was spinning like a hamster, but staying near the front.  Many of the other riders weren’t breaking a sweat.

We had been heading north on Hwy 3.  As we turned unto Hwy 203, it got a bit hillier and my speed began to vary with the terrain.  I began to wish for more gears.  I started getting passed by the other riders.

We continue through Lexington IN, unto Hwy 356, and eventually turn north again on CR 900/Pine Hill Rd.  Somewhere near there I got left behind.  I don’t remember where.

I followed the cue sheet (I wasn’t provided a GPS track ahead of time) along Horner Rd, Getty Rd, CR 1233, Polk Rd, CR 1250, Blake Rd, and eventually back to Hwy 3, but still heading north.

I hoped to catch back up to the group on the relatively flat highway, but I didn’t see them.

Eventually there was a turn on CR 850 that took us to our first control – Spring Hill Farm Twigs & Sprigs Tea Room.  It’s actually a farm, and a winery, and a restaurant, and, of course,  a tea room.

The rest of the group was there enjoying lunch.  They had arrived about 30 minutes before I did.  Wow, I’m slow.

I ordered a sandwich (very good) some iced tea (quite good) and had the waitress sign my card and refill my water bottle.  I headed out with the group again.

It had started to rain while we were eating.  It wasn’t a downpour, just rain.  There were no storms either.

Someone complained how cold the rain was.  I just thought about the sweat that had been running into my eyes an hour before.  This was much better.

It turns out this ride was an out-and-back.  It would require me looking at the cue sheet less.

As we turned unto Hwy 3 heading south, and got right up behind someone else’s wheel, and intended to stay there.  I did, until the first hill.  I fell back badly.  My legs were in need of rest, and without a lower gear to shift to, I just couldn’t put any more power into it.

Before long I was riding alone again.  The wet roads and foliage did make for some nice scenery. 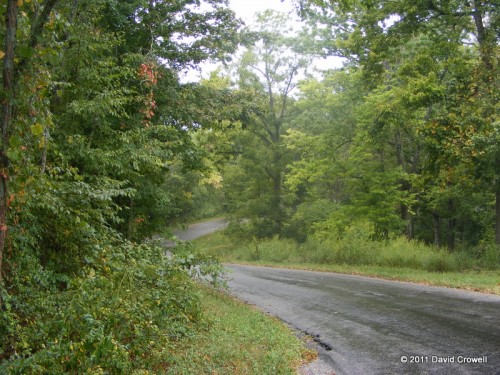 I retraced my steps back toward Charlestown.  The rain varied between a light drizzle and a steady rain.  I was happy that I had installed the new fenders on the single-speed, but a bit discouraged for riding alone on a group ride.

Then it hit me.  I wasn’t going to make the time limit anyway, so it didn’t matter.  I took my time.  I walked the hills that I had to.  I enjoyed myself.

I did stick to the course.  As I entered Charlestown, I considered not even going to the ride end, but just to my truck to drive home.  Charlestown Pizza was closed.  I figured it would be best to finish the ride just to say I did.

So I rolled up and Timothy was still there.  Everyone else had gone.  I had made the time limit with 14 minutes to spare!

Timothy informed me that we were meeting up at Patrick O’Sheas for food and drink.  So I rode back to my truck, and drove back to Louisville for food and beer.

While sitting around an outdoor table, I got to listen in on conversation of uphill time trials, Octoberfest, Paris-Brest-Paris, Mad Dog rides, and where the steepest hills are.  I had a good time.

I guess I need to get faster to spend more time with these people.  🙂

This is the out-and-back route:

2 thoughts on “Another 100K Populaire”