Traci, a co-worker, is a runner and is interested in bicycling.  We made vague plans to get together today.

I called her, and we agreed to ride my old 11-mile loop in Charlestown.  She is concerned about traffic, and this seemed a great low-traffic route, even more so on a Sunday morning.

I had some time to kill and I hadn’t had my daily caffeine fix, so I rode to Sunergos and had some coffee.  I then rode home, and threw the bike in the back of the truck to meet Traci across the river.

I was riding my LHT, and Traci rode an old Schwinn mountain bike.

Traci did the ride just fine.  She was concerned she’d be too slow (I’m slow), or that her bike wasn’t nice enough (it did the job).  The ride is moderately hilly and she didn’t need to walk any hills.

I don’t think I’ll make a bicycle commuter out of Traci anytime soon, but it would be nice to see her on two wheels now and again. 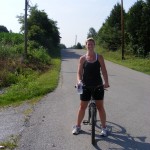 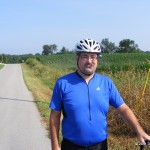 After we parted ways, I rode to a frozen yogurt shop, then to Java Brewing for more coffee.  This was a perfectly acceptable way to spend a Sunday.

One thought on “Sunday Fun”