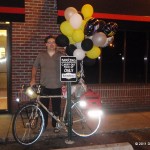 Yesterday was my birthday.  I had originally considered “riding my age”, meaning riding 40 miles, one mile for each year I’ve made it so far.

I had errands to run after work, and my wife had plans for after that.

While at work, 40 balloons were delivered to my office.  Also came a vase of flowers – some of them daisies.  I was told it’s because I’m getting ready to “push up daisies”.  That seemed a bid morbid.  🙂

I was expected to bring the balloons home.  I rode my bike to work, so yes, I rode through town with 40 balloons trailing behind me.  I got a lot of strange looks, a couple of honks, and one person yelled “happy birthday”.

I met up with my wife and daughter at Tony BoomBozz for pizza and beer.  I had a good day, but didn’t ride anywhere near 40 miles.

4 thoughts on “Another Birthday”