I’ve been using my Dinotte lights since the Fall of 2008.  They are bright, but moving them between bikes and keeping the batteries charged takes time.

I took the plunge and ordered a new set of lights from On Your Left Cycles.  What was ordered?

The shop built the new wheel once the parts arrived and called me to let me know it was time to bring my LHT in.  This was on Friday.

I didn’t want to drive my truck to haul the bike.  I also didn’t want to walk the two miles from the bike shop to work.  So I rode the LHT towing the tailer with the folding bike in it. 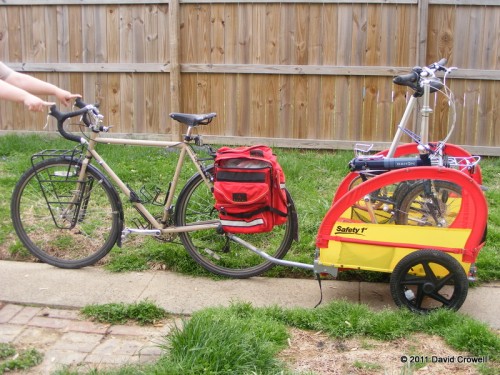 Once I dropped off the LHT, I rode the folding bike and pulled the trailer to work with me.  After work, I reversed the procedure to get the LHT and go home.

The headlight is mounted to the front rack and has an integrated reflector.  This also freed some space on my handlebars. 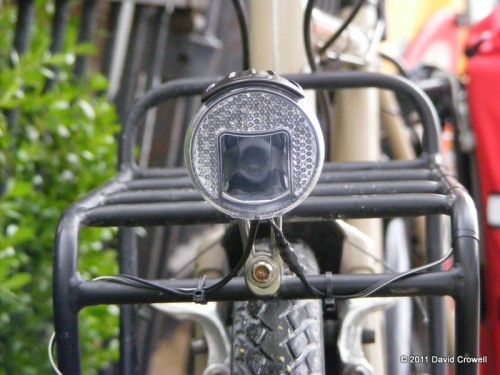 Although the polished SON hub looks really nice, it doesn’t match the matte finish of the rear hub.  That’s okay, this bike is about utility, not looking pretty. 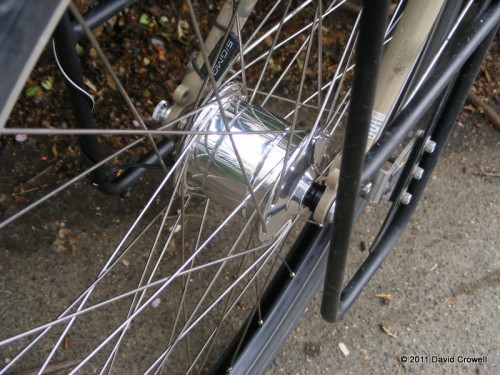 The tail light looks almost as if it were meant to be on the rear rack. 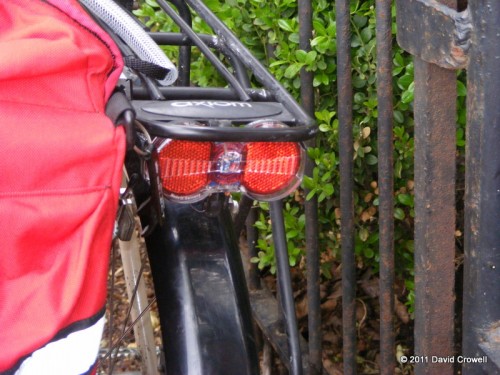 I’ve taken the bike out twice after dark now.  Both were short urban rides, but I’m starting to get a feel for what I do and don’t like.

The focused beam on the headlight puts plenty of light where you usually need it.  It doesn’t light up street signs as well my Dinotte, as it throws very little light upward.  I also felt a little blind while descending fast on a curve.  The light is bright enough, but the road goes off a different direction.  Maybe I should fly through Cherokee Park at night.  🙂

The standlight lasts plenty long.  I can sit at a long traffic light, and the lights are still lit, although a bit dimmer.

The hub just works.  I can sometimes feel a vibration at 16-17mph, but faster or slower than that and it goes away.  You don’t really notice the hub when riding.

If I were doing it over again, I would research a different tail light.  I may do this anyway, as they are inexpensive.  I would also consider a different rim.  The rim is probably fine, but as this bike is for loaded touring, a Dyad may have been a better choice.

I put the Dinotte lights on the single-speed.  I want another dynohub system for that bike, but I have to wait until I can afford it.  I may also move the new LHT wheel to the single-speed, and have a Dyad-based wheel built for the LHT.

Too many choices, but at least I don’t have to charge batteries.