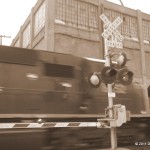 My wife and I had company on Friday and Saturday.  Two of her cousin’s kids came to spend the night.

I left work on Friday and rode out to Za’s Pizza to meet up with them.  After enjoying some pizza and beer, I rode home, beating them back to the house.  I can get through Bardstown Road traffic faster than they can.  🙂

On Saturday, Kristy wanted to stop by a co-worker’s house who was having a garage sale.  I didn’t want to get stuck there for very long and I had errands to run.  I hooked up the trailer to my single-speed, and met her there.

The house was down off of Southern Parkway.  It’s not an area I’m overly familiar with, but I didn’t have my GPS and still managed to not get lost.

I left there and headed toward Feeder’s Supply on Baxter.  Along the way the weather started looking ominous, and I had to wait for a train.  While waiting for the train, lightning started cracking.  It still wasn’t raining.

I purchased about 60lbs of pet supplied, loaded it into the trailer, and headed off.  I still had another stop to make, On Your Left Cycles, also on Baxter.

I was discussing a project with Drew at OYLC when the storm really started rolling in.  There was heavy rain, strong winds, possible hail, yellow skies, and strong lightning.  I stayed at OYLC for a few extra minutes to wait out the worst of it.

I later found out that my wife was still at her friend’s house near Southern Parkway.  She watched a metal shed/storage building tumble across the road.

Once the severe weather passed, it was still raining, and I headed for home.  My trailer still has the rain cover, which is helpful in keeping the dog food dry.

The road was littered with tree branches, trash cans, and other storm debris.  It was a slow, uneventful ride back home.

That little bit of riding on Saturday was still 14.8 miles – all of it while towing the trailer.

3 thoughts on “Fun Saturday and Around Town Ramblings”