I was supposed to meet Debbie and Dave at 7:30 am at the Bob Evans near the motel for breakfast.  Every other day of the tour I had slept well and felt rested when I woke up.  Tuesday night was different.  I had strange dreams and didn’t feel rested when I woke up (late).  I overslept until 7:28, so took a quick shower and ran over.  Debbie was there, but her husband wasn’t.  Apparently he decided to sleep in also.  After eating we went back to the motel to pack.

Here’s the actual route we rode, except the very end is modified for Debbie’s privacy.

Dave offered to haul my extra stuff in the car.  I cut my load down to one pannier.  Although this final day was a flatter route, it did make things easier.  I still had over 90 miles to go to get home.  They also offered to drive me home once we reached their house, which would save me 30 miles.  I accepted the offer later in the day.

The day started off cloudy and chilly.  There was also wind from the south, which did not help our forward progress. 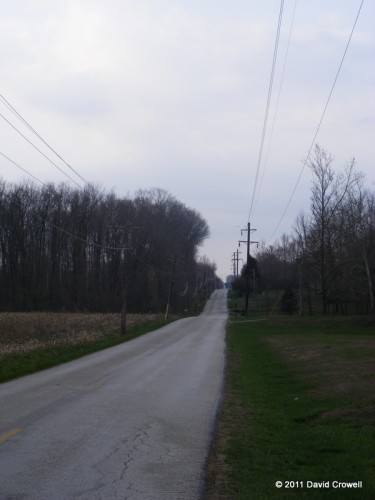 Somewhere southwest of Columbus we came across a rather friendly horse. 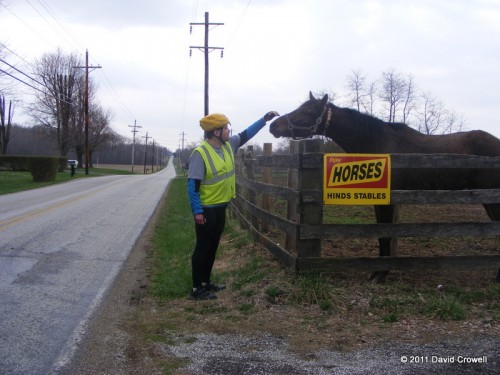 As we approached Seymour, the skies started to clear in one direction and it looked like a storm coming from the northwest.  The temperature did warm a little.  I was quite comfortable. 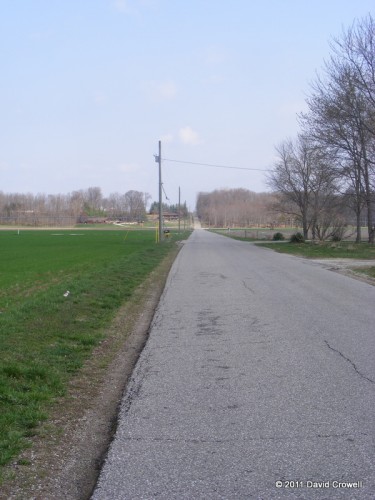 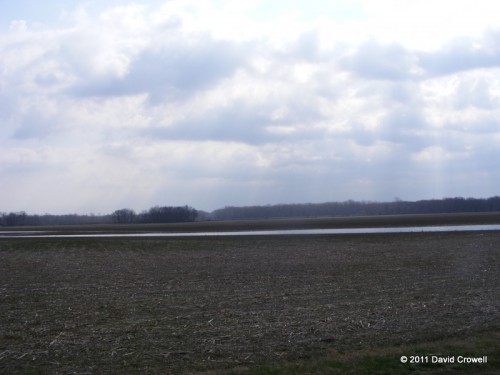 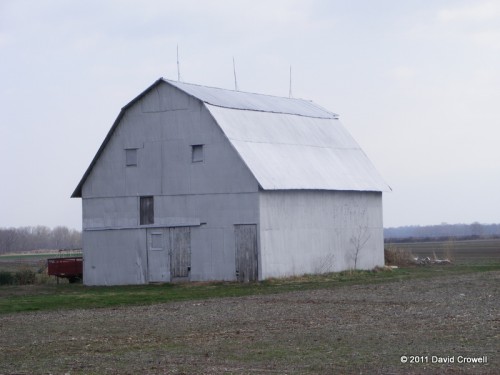 We crossed the White River at Seymour.  I’m not trying to be like Michael, but I like this shot of the river. 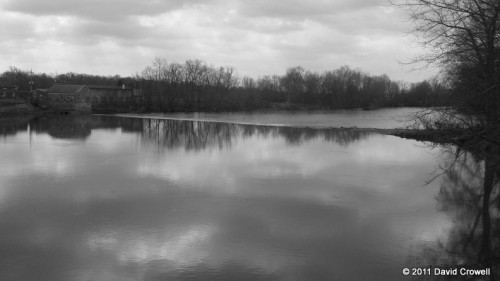 We detoured off our route in Seymour to find something to eat.  The GPS had an old address for Subway, so after riding on a really busy road (Tipton St/US 50) for too long, we went to Taco Bell instead.  Not ideal touring food.  Debbie has some heartburn later in the ride.

We continued south out of Seymour.  We ended up just east of a spot on the map called Dudleytown.  It appears to be just a single intersection, and we didn’t go out of our way to check it out, as the weather was turning bad. 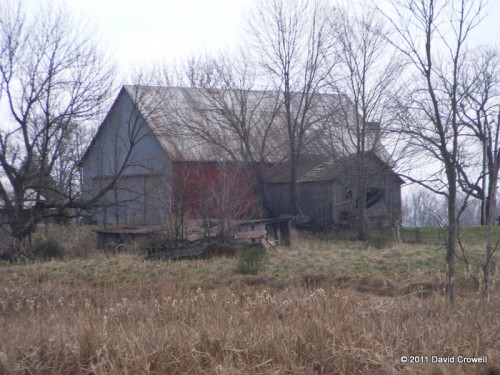 We fought against the headwind to try to get to Crothersville before it started raining.  It started raining the occasional large drop of rain.  We decided it was time for rain gear.  I had my J&G rain cape.  Debbie had an “emergency rain poncho”. 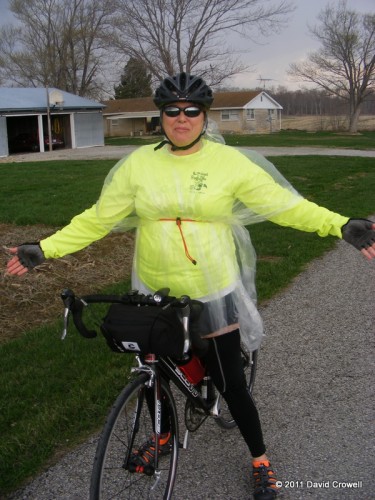 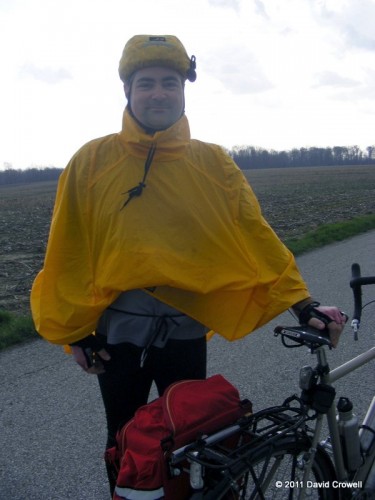 The skies really started to look ominous.  The wind was getting very gusty.  I mentioned the strange color of the sky in the distance, and that it could mean a tornado.  I was half-joking. 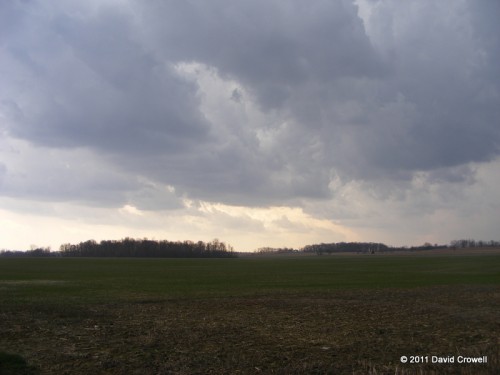 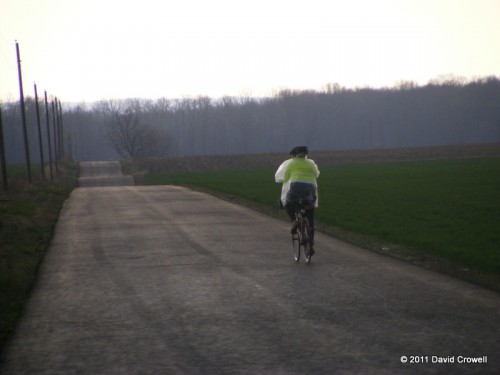 Shortly after the rain really started coming down.  The large raindrops were actually painful.  There was occasional pea-size hail.  I didn’t take any pictures at this point, as I wanted to keep the camera dry.  The new panniers kept everything dry without any extra rain covers.

The lightning never got terribly close, but in the wide-open areas of Indiana farm fields, it was very visible, and a little frightening… and I like thunderstorms.

As we rolled into Crothersville, I was unsure on rather we should take shelter and wait it out, or continue on.  We spotted a library, so I dashed in and checked the weather on one of the computers.  There was a tornado warning in effect for the area, and it looks as if the entire storm would pass within 30 minutes.

We went next-door to a Subway restaurant where we could rest, shelter, and eat.

We watched the hail continue outside for a while.  Then the weather cleared and the sun re-appeared.  We waited another few minutes for the weather warnings to expire, and continued on. 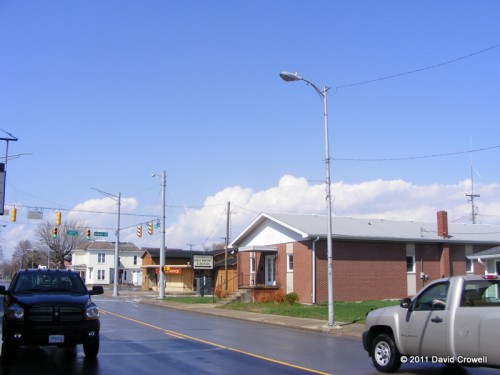 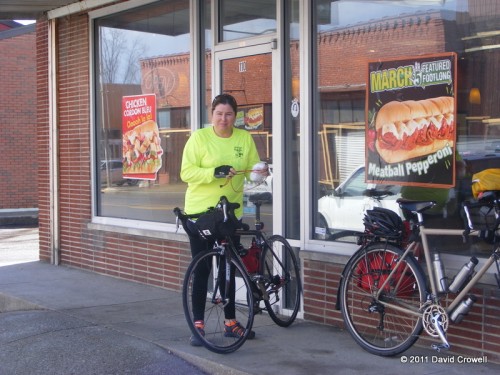 We continued out of Crothersville enjoying the sunshine and the change in wind direction.  We still didn’t have a tail-wind, but it appeared to be coming from the west.  At least it wasn’t coming from the south anymore.

I started seeing piles of what looked like snow on the side of the road.  I stopped for a closer look, it was hail.  Apparently that area got even more hail than where we were. 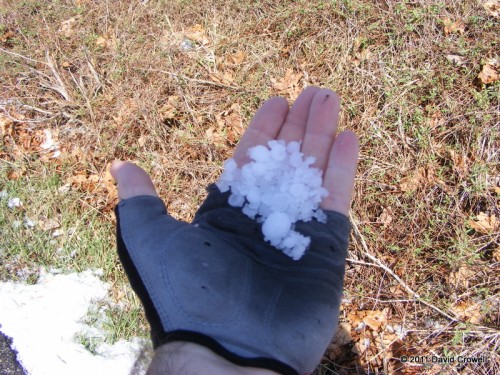 A little farther south, and the muddy fields were proof of how hard it had rained. 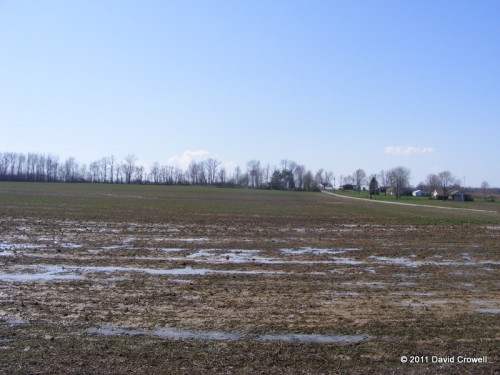 The ride to Scottsburg was quite pleasant.  We were headed due south most of the time.  The wind was from the west.  The temperatures had fallen slightly, but it was still comfortable and sunny. 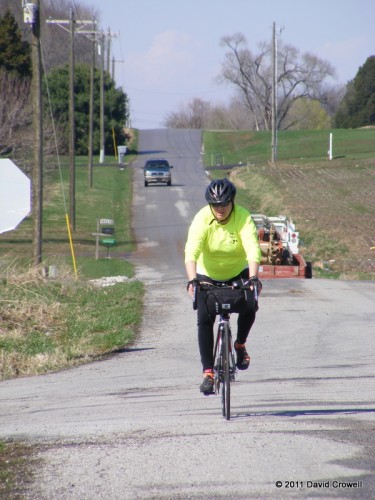 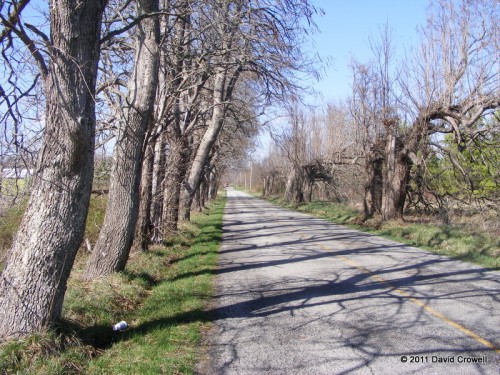 We stopped at a nice little coffee shop in Scottsburg.  They didn’t seem to have a public restroom, so we detoured again to get to a gas station.

Once we got south of Scottsburg we were nearly to Debbie’s house, and in an area that I’m mostly familiar with.  It’s a rural area, and horses are popular. 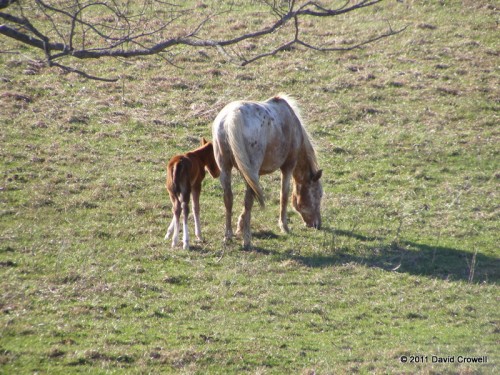 It’s a scenic area, and probably the hilliest portion of our last day riding. 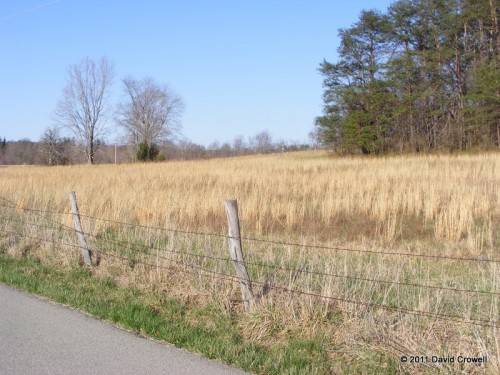 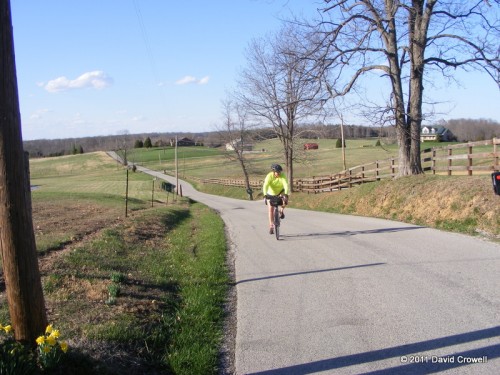 We reached Debbie’s house.  I did accept her offer for a ride home.  I was tired and ready to see my wife.  It would have taken me another three hours to ride home.  My daughter had come to visit, so the three of us went out for pizza (I had more beer of course).

I’ll write a wrap-up later that is less about what happened and more about how I felt about the adventure.