On Saturday morning I went for an eight mile “run”.  I probably walked half of it, yet I still could barely walk for a couple of days.

I’ve been ignoring the need to train a great deal for swimming.  Swimming is painful due to my shoulder arthritis.

I’ve made the decision to not compete in the triathlon.  Actually, I won’t be competing in anything.  I’m also not going to attempt to race the Tour Divide in 2015 as I initially intended.

The problem, is training.  Training isn’t fun.  Training hurts.  I don’t want to hurt.  It’s just not worth it.  I want to ride my bike and have a good time.

I had been formulating my decision all weekend.  I really didn’t want to talk about it.  I was ashamed.  I was angry with myself.  I posted on BikeForums about it with the subject “I’m a quitter“.  I actually got some really good feedback from the other members.

Quitting would be sitting on your sofa and eating cheese puffs. You’ve just refined your goals.

Life’s too short to do things you hate. Go out and ride, tour, randonnee, ride around the neighborhood….whatever. Do what you enjoy.

+1 on what everyone else said. Do what makes you happy. You’re still exercising and improving yourself by riding recreationally instead of training to race. I don’t blame you one bit for not wanting to do that stuff anymore. I tried it during the first half of 1993 for mountain bike racing. It was mostly fun at first and I did pretty well, but when it came time to upgrade from the Beginner class the fun was over. It became the kind of sufferfest I DON’T like, and not worth it to me. I’d rather suffer on my own terms.

I mentioned that Kent Peterson was my inspiration for attempting the Tour Divide in 2015.

The thing to realize is that Kent is a mutant. I mean that in the nicest way possible; I’ve ridden with him and he’s a really nice guy, great advocate for cycling, etc. But he’s in a class above most when it comes to riding.
He’s one of those guys that can survive on little to no sleep. He can fuel himself on garbage. No, really… we’re talking about a guy whose personal slogan is “Not A Nutritional Role Model”. He’s done a 1200k fueled on little more than Payday bars and Starbucks. He can ride for hundreds of miles on trail mix and peanut M&M’s. He won the Raid Californie-Oregon (1200k from SF to PDX, fixies only) then rode the additional 200 miles back to Seattle so he could go to work. By his own admission, he doesn’t beleive in “training” either. When you ride 12,000/year you really don’t need to do anything additional as training.
Most of us, with the right training, could finish a race like the Tour Divide or a 1200k brevet. Some people, like Kent, Vinnie M (over 40,000k RUSA distance last year), and Mark T (4x 1200k events last year) just have a different natural ability for the sport, and structured training doesn’t play much into their routines.

I’m of the attitude that if it’s not fun anymore, then why do it?

I know I don’t need the approval of others to make these decisions, but it did make me feel more comfortable with it after the fact.  I’ve disappointed at least two people by doing this, but I want to ride a bike not run and swim also.

I’ll never get to be car-free.  My wife requires a car.  I still owe on my truck.  I’m okay with the situation, although getting down to one vehicle would be nice.

I rarely drive, but I’ve been driving with Indiana plates on my truck for months after moving to Kentucky.  Part of it was laziness.  Part of it was waiting to get the lienholder to send the title.

Today, I drove to work so I could take my truck in for the inspection, then to get a Kentucky license plate.  I spent the extra money to get a Share the Road Plate.

The extra money for the plate goes to the Paula Nye Memorial Education Grant program, which provides money for a number of bicycle education and safety causes.

The biggest benefit to me is that when I’m driving, most cyclists will I’m keeping an eye out for them.

Tim hosted the RCCS Coffee Ride yesterday.  We were joined by Asher, Ward, and Patrick.  It rained lightly for most of the ride, and temperatures were cooler than forecast, but it was a good time.

I was on my recumbent, and this was a hilly ride, at least hilly by in-town standards.  I haven’t been riding the ‘bent much, so I ended up trailing behind everyone else up most of the hills.  I did get to bomb down and pass everyone on a few the downhills though.

This hill-bombing nearly caused to crash twice.  I took corners too fast, and almost laid the bike down while braking hard on wet roads.  Doing it once, okay whatever, the second time means I’m just stupid.

Today’s weather was warmer.  I headed to work this morning if 50 degree temperatures with cloudy skies and gusty winds.  I rode my LHT, still muddy from Saturday.  I wore my normal work clothes and relied on a good workout and short commute to keep me warm enough.

On the way home it was above 60 degrees, windier, and raining.  I was cold and wet when I arrived home.

Something has changed for my rainy rides now.  I went to the eye doctor on Friday and I’m now wearing contact lenses.  I bought some sunglasses for cycling on dry days, but now I no longer need to worry about the fogging lenses and water droplets affecting my ability to see in poor weather. 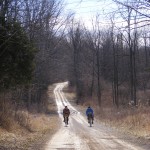 Michael and Tim worked together to plan a great ride near Muscatatuck National Wildlife Refuge.  The three of us were joined by Cathy and Kirk, who were excellent for their sense of adventure.

I’ll keep this post short.  It was one of my favorite rides.  It was challenging, but not to the point where you began to hurt.  It was a mix of paved, gravel, clay mud-like, and grass surfaces.  There was a lot of wildlife.  The weather was nice.

I mentioned that I was at work until 1:30 am.  My lovely wife was kind enough to bring pizza to me for dinner.  I overate, but enjoyed every bite.  My weight jumped from 220 to 225.  I’m sure I lost that weight today though.  🙂

I still haven’t decided whether to continue training for the triathlon.  Every time I run or swim, I’m sore for days.

If I don’t compete in the triathlon, I can’t see making my goal of racing the Tour Divide in 2015.  Should I give up on both, or dig in deeper and train?

My training partner and I are doing a mini-tour to Indianapolis and back over five days.  It’s a leisurely pace with a full day in Indianapolis.  It’ll be in late March, and I’ll have a lot of pictures.  We won’t be camping, but staying in hotels.

My only riding during the week was commuting, but it was great weather for it.  I did ride everyday (I have tomorrow off), even yesterday when I had to work over 16 hours.  I left work at 1:30 am.  That was the most peaceful commute home I’ve had in a long time.

The weather will still be decent this weekend when the RCCS is putting on two different rides.  Care to join us?

I posted over at the RCCS site about today’s wonderful ride.  Here’s the rest of the story.

After the ride I wandered around some unfamiliar neighborhoods.  My GPS was very helpful.  The weather was beautiful.  The wind was strong enough to make things interesting.

I eventually made my way to Bardstown Rd and had a late lunch and a good brew.  I played pedestrian for a while and walked around looking for little shops to buy my wonderful wife something for tomorrow’s holiday.  I found something suitable and rode home.

I’m out of propane for the grill, so I loaded the empty on the bike, hauled it down to the gas station, and exchange it.  After riding home (round trip 1/2 mile) I then rode to the grocery store.  I wasn’t going to haul the heavy propane tank all the way to the store.  I need to get a trailer.

I had my shopping done and things put away before my wife arrived home from work.  I had a tiring, but satisfying day.  At 55 total miles, I’m not complaining.

It’s better to spend your time, effort, and money working on Doing or Being rather than Having.

Doing and Being are closely related and can lead to a fulfilling life.  Having can make you a slave to fashion/posessions/marketing/consumption.

The lines aren’t always clear-cut.  You need to Have certain things to Do certain things.  The difference is in your primary focus.

I may have been pushing myself too far.

I ran another race last Saturday, the Reindeer Romp 4k.  It was originally scheduled to be before the 5k I did a while ago, but it was rescheduled to to weather.  I did run a bit better pace (26:54 for the run, 10:49 per mile), but I was incredibly sore after the ride.

Running in general just seems like a bad idea for my body.  I have issues with my knees and hips when running.  I also end up sore all over the next day.  I do get a stronger endorphin buzz from running than cycling, but I’m not sure if it’s worth it.  I don’t enjoy running much at all.  I sort of enjoy the first hour or so after a run though.

My shoulder arthritis has flared up again.  I’m not sure of the cause.  That started to cut into my bike riding, until I got the recumbent out again.  I can ride the recumbent without aggravating the shoulder, but now it’s causing knee pain.  It may be I need to readjust the seat.  I’ve actually gained a little weight since I last rode it regularly.

I took (yet another) break from the YMCA.  Spin class really hurts.  Swimming aggravates my shoulder.

The real question is am I pushing myself too far?  I’m seriously considering dropping out of the triathlon training.  I don’t want to.  Completing a triathlon would be really cool.  It’s still the swimming I’m most worried about though.

I should know in a few more days or weeks.