I rode the single-speed over 60 miles for the weekend.  I think it’s making my legs stronger, but the process is a bit painful.

I’ve tried to keep the bike simple, but my utilitarian nature required me to outfit the bike with lights, bell, saddlebag, water bottle, computer, and a clip for papers or cue sheets.

I dropped my LHT off at On Your Left Cycles for some maintenance.  I hung out at Vic’s Classic Bikes for a while.  There was some talk about starting a bike co-op.

While working in the back yard, I came across a rather scary looking spider.  I don’t know enough about spiders to identify it.  Does anyone out there know what it is?

I hosted the Saturday morning RCCS ride, but only had one other rider show up.  We still had a good time.  I’m hosting another this coming Saturday.  Come if you can. 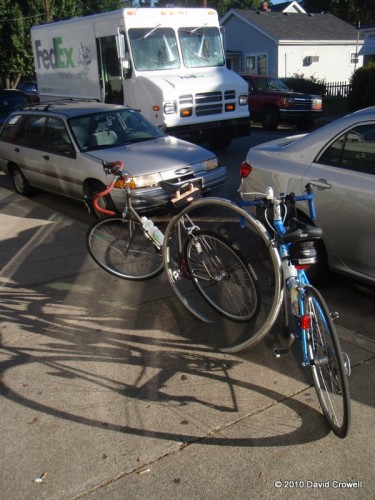 Later in the day, Tim and I met up for a ride and some food and drink.  Two lugged-steel single speed bikes next to each other was quite a sight. 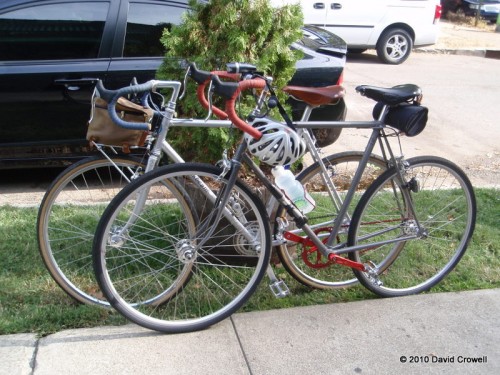 Sunday morning, Vic has a ride from his shop.  I joined him, his son, and two others for the morning ride.  Tim joined later, this time on his Bleriot.  So we had six lugged-steel bikes with Brooks saddles riding together.

Sunday evening did not go well for me.  I had to rush to work and help with an issue.  I was there until 11:30 at night, and it left me quite tired.  I’m still traveling only by bike, but it was really hard to get out of bed this morning.

I commuted to work last night and today on the single-speed.  That requires wearing a backpack, but my LHT is still in the shop.  I could ride the recumbent, but the single-speed is just too much fun.