I haven’t been on the bike enough recently.  I’ve been riding the new folder on short rides, but that’s about it.  The month of July was set to be a record mileage month, but not now.

My numb hand is back to normal.  I rode the LHT into work today with the stock saddle.  My poor Brooks saddle is sagging and causes numbness.  The stock saddle wasn’t great, but didn’t cause numbness.

Now that I’ve ridden the LHT almost 40 miles for the day, I know that I still have fit issues.  I tweaked the saddle position some, and rotated the handlebars forward.  I’m going to ride again tomorrow and see how much improvement there is.

Not riding to work causes me stress.  It’s weird.  I drove to work every day for many years.   I even had a hellish 35-mile one-way commute for a couple of years.  Yet I felt that sitting in the car with creature comforts made it okay.  I don’t feel that way anymore.  I don’t like throwing away money on gas, parking, and car maintenance.  I don’t like gaining weight.

I do like the fresh air, sunrise, weather (except headwinds), adrenaline rush, and the overall alive feeling I get when riding my bike to work.  It gives me something to look forward to twice a day.

I took the new Dahon out for my 11-mile loop after dark.  It’s a mildly hilly rural rout.  I had put the PB Blaze headlight and PB Superflash taillight on the bike, and headed out.

Early in the ride is a nice fast downhill.  Let’s just say I won’t be hitting 40 mph on this bike.  I was riding the brakes most of the way down the hill.  I don’t know how fast I was going, but I’m guessing 25 or 30.  The bike just doesn’t feel stable beyond that.

I had adjusted the derailleur before the ride, but I’m still having an issue with the highest gear.  I guess I’ll take it in for an adjustment.

It only has seven gears.  The range is much less than my other bikes.  It perfect for city riding without horrible hills.  Even the hills on my route were okay in the lower gears, but I wasn’t carrying any extra weight.  The higher gears weren’t really necessary, because the bike just isn’t stable at high speed.  Once I get the seventh gear working, I’ll be perfectly happy with the gear range the bike has.

I’ll be taking the bike to DC next month, as that is some pretty flat riding.  I may not need to shift.  🙂

The ride was peaceful.  It was still quite warm out.  The insects were swarming in big clouds.  I tried to keep my mouth shut to avoid a “protein snack”.  The nearly-full moon was out.  Mars was quite visible.  There is very little traffic on this route.  I need to do this more often.

I arrived home today after work (driving my truck) to see a large box out front.

Let me back up a minute…

I only rode my bike to work two days this week.  I only rode home 1 day, as the other I got a ride home.  My idea of another record mileage month is out the window.  I’ve not been riding enough, but I’m not letting that bother me.

My wife will be home tomorrow, a bit earlier than originally planned.  I’m glad she’s coming home, but it will cut even more into my bike riding time.

So anyway, I open the box and find a new bike. 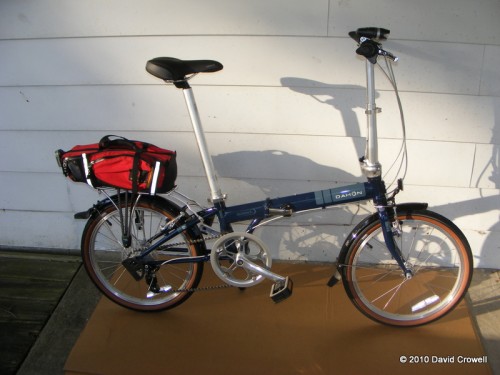 It’s a Dahon Speed D7.  It certainly won’t be my primary bike, but it could come in very handy for travelling, or even short around-town trips.

How many of you have a wife that would surprise you with something like that?

It folds up quite small.  See how large the trunk bag appears on the folded bike. 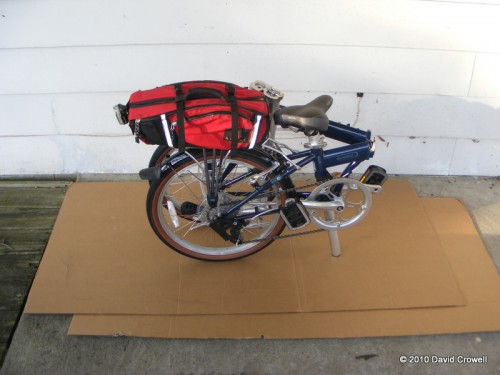 It is officially too big to go as checked luggage on most airlines without oversize items fees, but I’m going to take it with me to Washington DC next month, and see how that works out.  It’ll be nice to have my own transportation while on a business trip.

I was amazed that it came with fenders and a rear rack.  I just threw on a cheap set of lights and my trunk bag, and it’s ready to go.

I did take the bike for a four-mile ride after getting it set up.  I rode to the bank, the pizza place, and home again.  I enjoyed some good food, a great beer, and a new bike from my wonderful wife..  Life is good.

I had a mostly enjoyable weekend, yet I only rode 3.5 miles.

I had been pushing myself to break a new record, and it just wasn’t fun anymore.  So, I didn’t ride, other than one trip to the pizza place and back.  I rode wearing normal clothes (it was a short ride), sandals (no clipless on the LHT), and <gasp!> with no helmet.  I actually intended to wear the helmet, but forgot it on the way out the door.  Once I was on the bike and realized it, and didn’t bother going back.

I did spend some time over the weekend getting a new home-theater PC up and running.  Now I can watch Doctor Who episodes (via iTunes) on the TV instead of the tiny laptop screen.

I also spent some time watching the TV.  I have a weird relationship with TV.  I hate the normal crap.  I don’t have cable.  I rarely watch TV, but then some particular show will come out that I’ll purchase on iTunes, and I’ll spend entirely too much time with it.  Right now, that would be season 5 of Doctor Who.

I’m back on the bike today.  I rode to work, with a full coffee pot strapped to the rear rack.  I need to buy a large thermos.

I’ve been riding a lot of miles.  I broke a few records on Sunday.  I’ve ridden two centuries in a little over a month.  I hit 3000 miles of cycling for the year during my commute today.  I’m well on track to get 5000+ miles for the year.

The depression that was really affecting me earlier this year has gone away.  I’m sure it’ll come back again some day, and I’ll have to cope.  Overall, I’ve been feeling really good recently.

I haven’t had any real weight loss since March of 2009!  That sickens me.  I know weight is just a number, but I still have a gut.  I feel like I’m way too fit for this gut.  I’ve got to lose the gut.  Damn the gut!

I’m having comfort issues on my newest bike, Surly Sue, the LHT.  Although I’ve ridden two 100-miles rides on that bike, the recent rides have left me with possible ulnar nerve issues in my left hand.  I also have some saddle issues to figure out.  As such, I’m riding Oria, my recumbent, more often, as there is no pressure on the hands.  I will get a bike fit to help get comfortable again, but in the meantime it’s nice to have another option.

I’m trying to get my eating under control.  I had started my “food diary” back up a while ago, but that didn’t last long.  I need to track what I eat.

I’ve decided that I need a fast bike.  Both my current bikes are designed to be comfortable for hauling stuff long distances.  Neither is really designed to be fast.  After much thought, I think my fast bike will be a recumbent.  Probably a Bacchetta Strada.  It won’t be until at least next year until I can afford one, but that’s the plan.

I felt strong, and arrived at 4:05 a.m.  I had plenty of time to prepare for a busy day.   I was able to leave work early, but my pace on the way home was slower.

I’m having comfort issues on the LHT.  I’m going to have to schedule a fit with Bluegrass Bicycle.  My left hand goes numb while riding, and often stays that way for a while.  I’m hoping I haven’t already done nerve damage.

I’ve decided to stick to riding the recumbent in the meantime.  I didn’t ride Wednesday because I overslept (story of my life…).

Today was interesting.  I rode the recumbent to work this morning.  Had a stressful, busy day at work.  Left work at 5:00 and met up with Tim.  He was riding his ‘bent, so we rode together around Louisville for about 17 miles.  There was some light rain and lightning in the distance, which just made it a bit more interesting.

We parted ways, and I rode home.  So, in addition to a busy day at work, I put over 53 miles in.  That made the day much better than it would have been otherwise.  It was also fun to see Tim on his ‘bent.

Shortly after parting ways with Tim, and heading down Main Street downtown, I saw David Morse from CART photographing closed sidewalks, and planning a protest for the poorly managed manner in which it is done.  I may have to spend my lunch hour with them tomorrow.  🙂

The worst part of being sick may have been staying off the bike.  Now that I’m better, I’ve been riding.

The weather has been very warm recently.  We’ve had two heat waves with highs in the 90s pretty much every day.  There was a break between the heat waves, but that’s when I was sick and not riding.

On Saturday I met up with Tim for a mostly urban ride around Louisville.  We did spend some time on the Levee Trail, including a portion that appears to be new, and not yet open.  We ended up with 57.1 miles.

On Sunday, Tim came to my place for a hillier ride.  We planned 35 miles, but he had mechanical issues that caused us to abort the ride at 13.9 miles.  That was a bummer.

I spent a few hours being slightly depressed and even took a nap.  I could have been productive and mowed the lawn, but I didn’t.

Once evening came, I knew I needed to ride.  I hopped on the LHT and headed toward Louisville without really having a plan.  Sunday was the 4th, so the sound of fireworks was never far away.

Once I got to Louisville I basically rode toward the airport.  I’m not sure why.  I eventually stopped and sent a text to Tim.  He was at the waterfront with his family enjoying a concert and waiting for the fireworks.

I headed to the riverfront and used the free valet bike parking provided by Bicycling For Louisville.  I crashed Tim’s party (sorry Tim!) and hung out with he and his family for the last of the concert and the fireworks.

I rode home in the dark (with my great lights!) stopping at Waffle House for “bike fuel”.  My total mileage for that ride was 43.8.

I had Monday off of work for the holiday.  I again rode with Tim where he hoped to stop at a number of nature preserves.  We did indeed do that, but anyone who rides with Tim knows that he often makes the route up along the way.  We rode off-road some on our LHTs.

At 38.3 miles, this wasn’t a really long ride, but with the heat and the off-road stretches it was tiring.  It was a good ride and well worth it.

I seem to be over the strep now.  I have a feeling that I’ll have no more symptoms sometime tomorrow.

Unfortunately, normal for me usually means my wife is out of town.  That will be true again.  I’ll be taking her to the airport early tomorrow morning before work.