Okay, I’ve been back at work since Tuesday, but I’ve been awful busy.  I thought I’d post some pictures and diet updates.

I haven’t been watching what I eat or weighing myself.  I’m taking a break from the weighing and trying to focus my energies elsewhere.

I ate what I wanted on vacation, and have pretty much kept doing that in the few days I’ve been home.  Losing weight is still important to me.  I just need to focus on it again.

I rode a little over 45 miles on vacation.  Thursday of last week was a short but hilly ride.  Sunday was about 25 miles and several thousand feet of climbing.  I think I prefer riding in the mountains over really flat terrain  such as I did in Florida in September.  On Monday on the return trip I rode down the mountains from the highest point of highway 442 in the Great Smoky Mountains National Park down to Gatlinburg.  That was a fast 15-mile ride.

I took a lot of photographs on vacation.  I’ll just share a few.

The mountains are quite lovely. 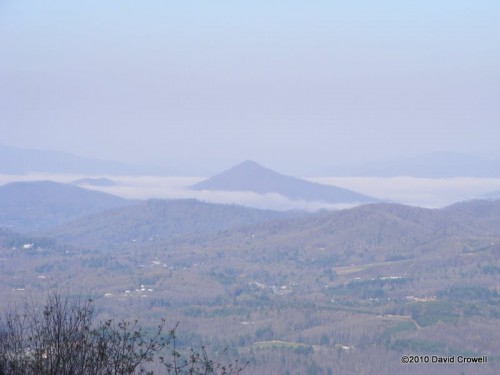 We went canoeing on the New River outside of Boone NC. 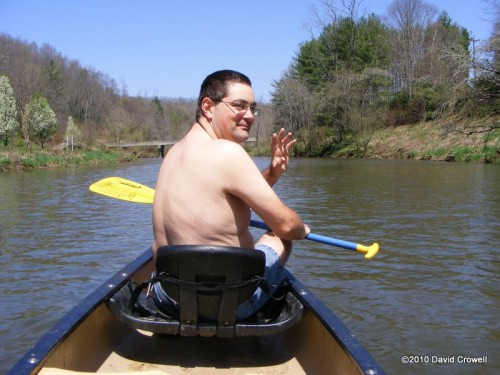 Mountains in the evening are great for photographs. 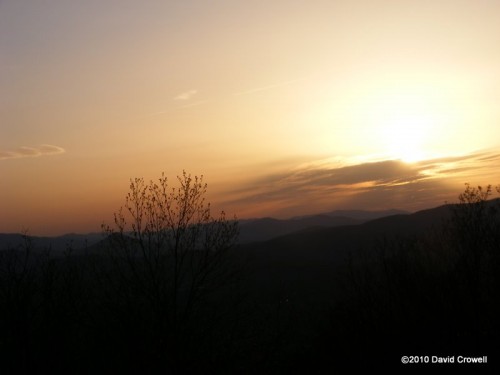 Riding in the mountains is challenging but rewarding. 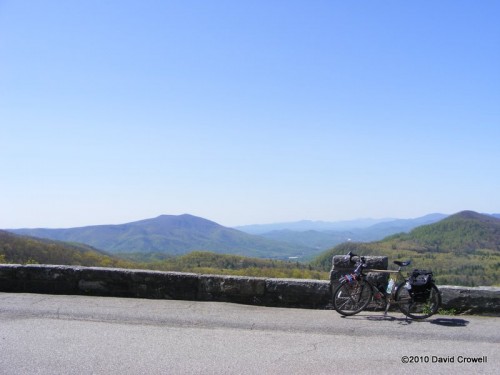 I rode through the (former?) town of Pyatte. 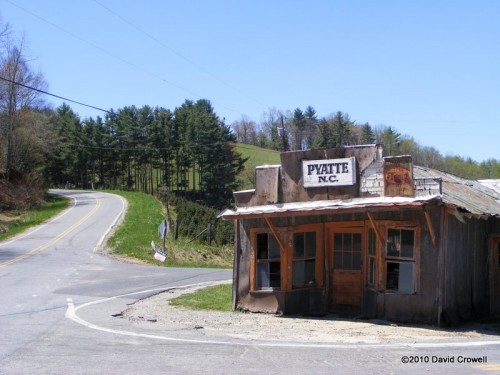 This was a very picturesque area that I wasn’t able to explore by bike, but was driving.  If I ever go back to the area I will ride there.  Steep gravel roads with switchbacks and stunning views. 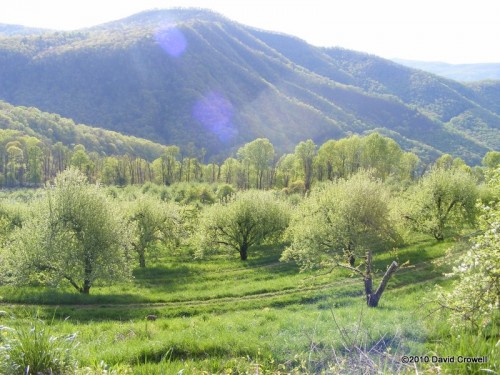 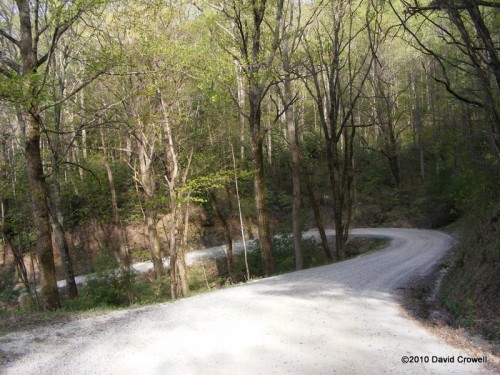 Kristy and I took a helicopter ride on the way home. 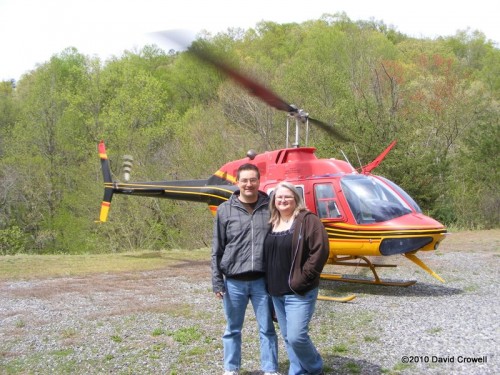 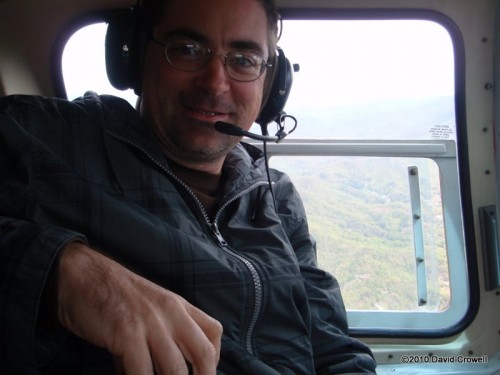 I’m on vacation in the mountains of North Carolina.  My wife and I are staying at a wonderful little cabin in the woods.  I’ve taken a short ride so far on the Blue Ridge Parkway.  Mountains are fun!  I’ve also been enjoying canoeing and other touristy things.  Tomorrow will bring colder temperatures, and a longer ride.

I’ll post a lot more pictures once I’m settled at home and have better internet service.

Oh, I don’t recommend balancing a bike like this, but it was fun. 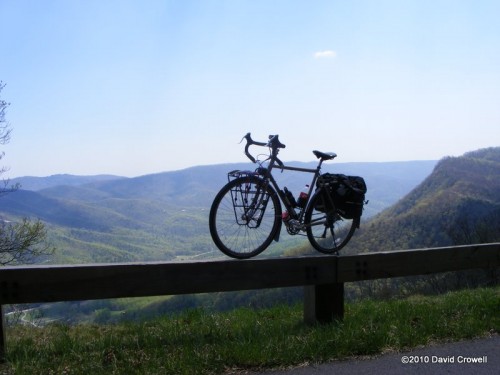 I haven’t been posting much recently, but life has been busy, and I’ve got a few things to post about.

I haven’t been tracking my eating or weight since I got back from DC.  I’m trying to concentrate less on that, and spend more time enjoying life.  Practicing moderation is still hard for me.

I’m still riding a fair amount.  I went on a 50-mile mixed-terrain ride with Tim on Sunday.  It was a beautiful day in a beautiful area.  See a few pictures below.  Also check out Tim’s post with pictures.  Yes, there was a stream crossing.  Yes, there was an off-road section.  Yes, we were both riding LHTs.

I didn’t ride to work on Monday, but I did ride on Tuesday.  My wife picked me up from work on Tuesday, so my mileage isn’t quite where it should be.

While I was standing outside work waiting for my wife to pick me up yesterday, Adam approached me about my Surly LHT.  He apparently has been, or still is, bicycle touring across the U.S.  I didn’t have enough time to find out the details, but we talked bikes for a few minutes.  He’s touring with Dwight, and they are documenting their travels online.  It seems they haven’t updated the blog since last month though.

My wife and I are leaving today for a vacation in the mountains of North Carolina.  We’ll be bringing bicycles, but that’s not really the point of the vacation.  With luck I won’t have cell reception.  🙂

My daughter will stay home to take care of the dogs and go to school, so this should be a really low-stress vacation.  I’m looking forward to it.

When I initially lost a lot of weight it gave me a huge sense of accomplishment.  Unfortunately, that fades over time.  I’ve been fighting with depression again.  I’m not sure of the best way to deal with it.  I’m not a believer in medicating for it.  Writing about what I’ve done and where I’m heading is probably the best tool I have to keep the depression at bay.  I do have to say that today is much better than yesterday. 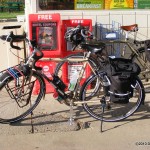 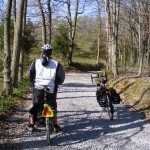 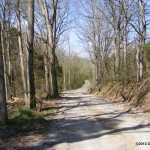 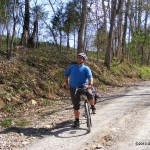 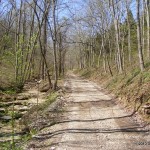 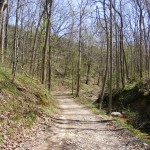 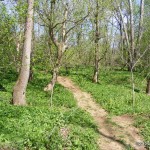 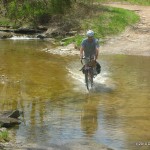 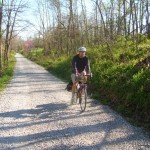 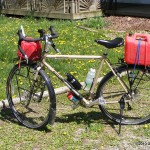 This post is directed at Tim, who told me I need to get a cargo bike.  I needed gas for my mower and trimmer today, so I rode to the gas station to get it.  $10 worth of gas, no problem.  It wasn’t a long ride, but I did get a few weird looks.

The picture below was taken after work yesterday.  I needed to ride from work in Downtown Louisville to Feeder’s Supply in Clarksville.  I let Google Maps give me bicycling directions, and I discovered the pedestrian/bike bridge over Browns Station Way.

The path is a bit overgrown, and the bridge a bit worn looking, but it worked well. 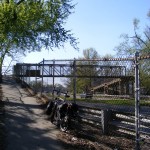 Also on the topic of cargo bikes, back in December 2008 I hauled home a fair amount of groceries on Nermal.  I’ve also used the front rack on my LHT to haul a propane tank, but I don’t have pictures of that. 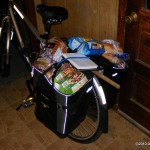 I bought a few new parts for the LHT, and installed them early Tuesday morning before riding to work.  I took the pictures below on my morning commute.

I still haven’t named this bike.  It’s beginning to bother me.  🙂

Everything above came from Bluegrass Bicycle except the pedals, which I ordered from Velo-Orange. 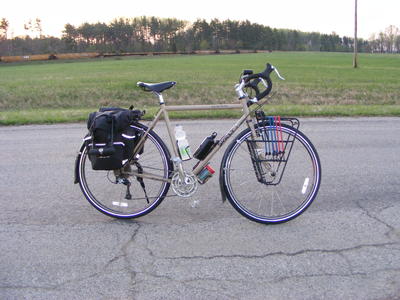 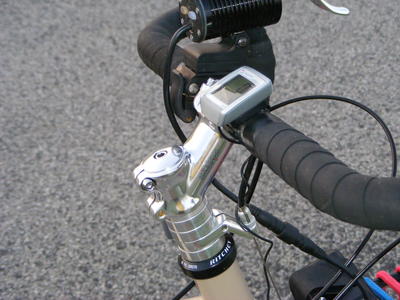 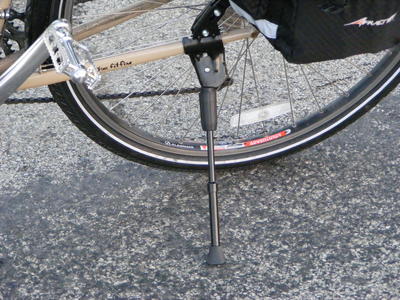 I immensely enjoyed Tuesday’s commute, but unfortunately overslept today and drove to work.

This past week has brought a lot of changes.  Some of them positive, some of them not.

I believe the paleodiet works.  I think it could work for me.  However, it’s a trial and error process to get there.  Since I started the paleodiet I’ve been suffering depression and lack of energy.  I’ve also had dizzy spells.  I don’t have the drive to figure out how to adjust the diet, so I’m switching back to my previous diet.  I need to watch what I eat.  I used to track calories, but I’m not going to this time, unless I start gaining weight again.

My new-old diet has helped me feel better, mostly.  My energy level shot back up quickly.  The depression is fading, but not quite gone.  I’m still having minor dizzy spells.

I’m writing this from a hotel room outside of Washington DC.  My wife is here for work, and I drove to meet her.  I’ll be heading home in a few hours.

I brought Nermal with me to ride around DC.  I’m glad I did, but I’ve had some mechanical problems with the bike, and may be retiring it soon.  Kristy joked that I should have a “funeral” for the bike, and make an ID card identifying the bike as a “parts donor”.

I rode just over 30 miles on Friday, and did some sight seeing around the capital.  It’s Cherry Blossom time, and a beautiful spring day, so the crowds were out in force.

On Saturday, I only rode about 10.5 miles, because I turned back due to the mechanical issues I mentioned.  I didn’t want to walk back to the hotel.  I spent most of that ride in Alexandria.

I have to admit that the Mt. Vernon trail is rather nice.  It was heavily used while I was out.  There were many cyclists, runners, walkers, and what not.  I saw three trike riders.  I stopped and talked to Michael riding a Greenspeed X5.  He was kind enough to let me take it for a short spin.  Now I have another item to add to my wish list.  🙂

I’m a bit underwhelmed by the “bike friendliness” of the area.  Although the trail was nice, getting off the trail and unto a major artery in Alexandria was met with much honking, yelling, and even the flashing of a badge.  I later looked it up, and I was allowed in the road.

In the part of DC itself that I rode in there weren’t actual bike trails, but simply wide sidewalks that were also used as bike paths.  This was not ideal, especially with the crowds.  In fairness, it was faster than attempting to ride in the streets, where traffic was mostly stationary.  I also managed to fall over while coming to a stop in front of hundreds of people.  That was embarrassing.

There is a bike/pedestrian path along the Woodrow Wilson Memorial Bridge.  This path makes it possible to easily ride from Alexandria VA over to Prince George’s County MD.  I wasn’t able to find any good bike riding on the Maryland side.  There were a lot of riders going back and forth across the bride, many of them with children.

I’ve put a lot of miles on the new Surly LHT I bought in January.  I’m still having comfort issues with it.  I’ve ordered a new stem from Bluegrass Bicycle to raise the handlebars (I’ll be picking it up on Monday).  I’m hoping that it will help.  I rode the recumbent to work on Wednesday, and had forgotten just how comfortable it can be.  I can ride many miles on the Surly, but do I want to?  I can climb steeper hills with the Surly, but I can climb most hills on the ‘bent, and walk the ones I can’t ride up.  I won’t be buying another upright bike until I’ve made up my mind about this.  Poor Nermal (the cheap hybrid that is now broke) will not be replaced.

Kristy will be home on Monday also.  I’ve ridden a lot of miles while she was gone.  I can’t let that stop.  I love the way riding makes me feel.  It isn’t even just about weight loss anymore.  It’s a combination of things.

I get cranky when I don’t ride, so to be a better husband and father, I must ride often!

My weight had dipped when I started the paleodiet.  It’s now gone up a little, but seems to be holding steady now.  I haven’t been weighing as often.  I’ve actually quit focusing on weight as much as I used to.

I’m trying to find a healthy balance in my life for everything.  I tend to obsess over things, so I’m taking a temporary hiatus from weighing myself.