I bought some meat a while ago and froze it.  I don’t remember if it was several pieces of roast, or several thick steaks, but in any case it was relatively inexpensive beef.

I put them in a with a small amount of olive oil, put a slice of onion on each, sprinkled with garlic, salt, and pepper, and cooked on a low heat while covered.

A while later they were done (actually slightly over-done).  I served with brussel sprouts, and it was good. 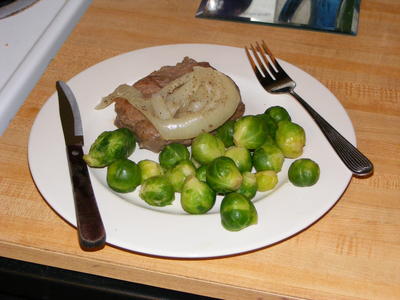 One thought on “Beef!”