I rode The Ride to Conquer Cancer over the weekend.  Two days, 157 miles, and no flats!

I’d like to thank everyone who donated to this cause.  I’m glad I could do my part in the fight against cancer.

The ride itself was a wonderful experience.  It was better organized that I thought it would be.  It was well supported.  They had the right foods, and the stops were spaced well.

I had been riding less in recent months, and almost sold my recumbent bike recently after thinking I couldn’t do hills on it any more.  I was a bit worried about my ability to finish this ride.

I rode the entire course.  I never walked a hill.  I was far from fast.  I rode 82 miles on Saturday in 7 hours and 40 minutes.  The fastest riders arrived in about 4 hours.  The climb out of Frankfort was pretty brutal.

On Sunday, I took a slower pace, as I still hadn’t fully recovered.  I also met up with Mark, another recumbent rider on his Rans V-Rex.  Mark and I seemed to be riding the only recumbents in the ride.  We rode together for the full 75 miles on Sunday.  We finished in about 8 hours.

I don’t know if I’ll ride again next year.  The fundraising is hard and I usually feel uncomfortable asking for money.  My daughter is expressing interest in riding with me next year.  I think that’s great, but would mean raising $5000 for the two of us.  I think I’m going to gauge “pledges” this time before signing up.

We were provided tents, but in my rush to get ready at the last minute I forgot to bring a sleeping bag, towel, or flashlight.

I took a shower on Saturday evening and used an extra shirt as a towel.  I managed to get a crew member to drive and buy a sleeping bag for me (which I paid for).  I fumbled around in the dark to get ready on Sunday morning.

It rained overnight, and the tent leaked a little, but the weather during the ride was pretty good on both days.

All things considered, I slept reasonably well, and enjoyed the experience at camp. 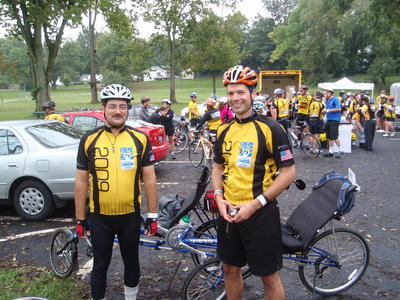 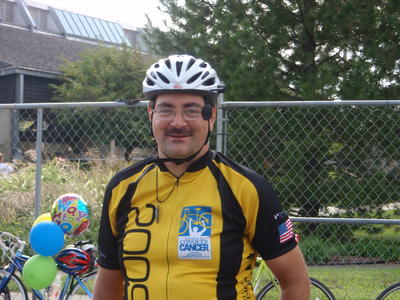 I’m riding The Ride to Conquer Cancer.  I have enough offline donations to bring with to get up to the minimum.  Any additional donations would be greatly appreciated.

I’d like to extend a big thank you to those who donated to this worthy cause, and to Bluegrass Bicycle for getting my recumbent bike ready in time.

This ride will be a bit more of a challenge than I originally bargained for.  I’ve slacked off on my riding, and I’m not quite in the shape that I was a few months ago.

I’ll post again after the ride with some pictures.

I announced back in February that I was going to participate in The Ride to Conquer Cancer.  It’s a 150-mile two-day bike ride from Louisville to Lexington and back.

If you can donate something, please do!  This is a great cause that will help cancer patients in the community.

Chances are, cancer has affected someone you care about.  That certainly is the case with me.  Please donate now.

The deadline for mailed-in donations has already passed.  Please donate online, or see me personally for donations in cash or check.

Kristy, my shiny new wife, has moved in.  Her job has transferred, and we can even do some car-pooling.

We’ve still got of stuff to move from her old apartment, but we’re getting to it.  Although we’re probably still going out to eat too often, we are splitting meals now which is better for the wallet and the gut.

I’ve worked three days this week.  On Wednesday I drove to work.  Thursday and Friday (today) I rode the bike into work, but Kristy picks me up after work.  That seems to work out well.

I’ve been riding Nermal.  Oria needs some work on the wheels, and should probably have the bearings cleaned and regreased after the sand and saltwater spray in Florida.

I am disappointed with my weight.  I’ve been above 210 lbs all of this month, and part of last.  I had been down below 198 as recently as July.

Kristy is supportive of my weight loss and bike riding.  She kicked me out of bed this morning so that I had time to ride.  I love her for that.  🙂

On Sunday, I went on a 40-mile ride from Cape Canaveral to Sebastian Inlet State Park. It wasn’t an unpleasant ride, but the flat terrain, crosswind, and traffic made it less than ideal.

The payoff was supposed to be the beach at the end of the ride.  Kristy drove there and met me.  We were at the beach for only a few minutes when the bugs got bad, so we left in the truck with the bike in the back.

I did notice that my lack of riding recently has affected my fitness level.  The flat 40-miler kicked my butt.  I need to ride more often.

I’m home, and was back at work today.  I drove, but I’ll be on the bike tomorrow. 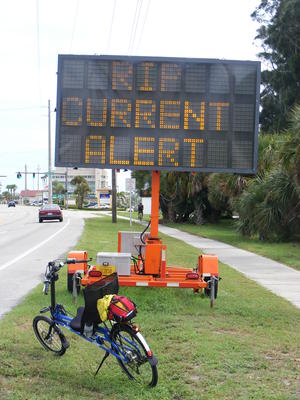 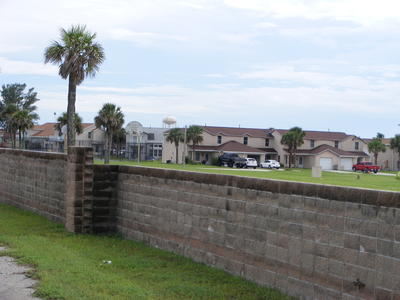 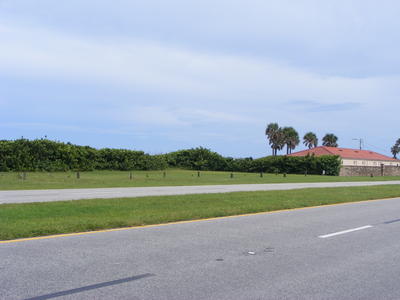 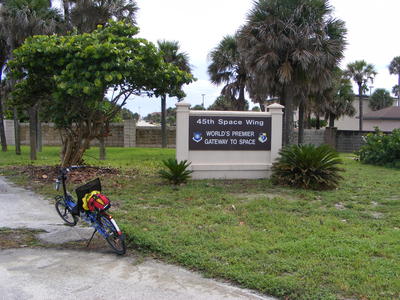 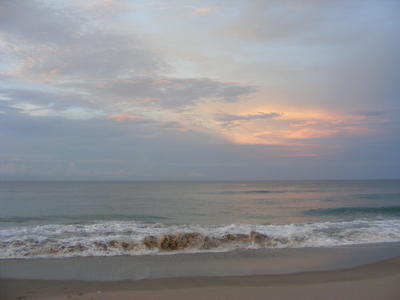 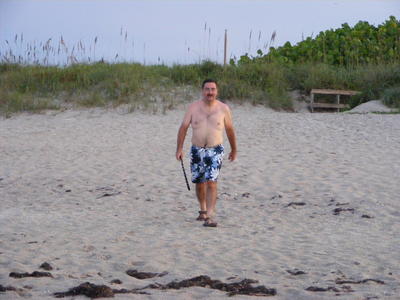 Kristy and I were married yesterday, 9/12/09.  The weather was wonderful, the sun came out just for us.

A few friends and family members gathered on the beach for the fun, relaxed ceremony.

We kept the ceremony simple (about as simple as driving to Florida can be). We had a reception at a local restaurant. We were surprised with a phenomenal beach-themed wedding cake.

Most of our honeymoon is actually a pre-wedding adventure. I’ll be back at work later in the week. It’s been a lot of fun, and I’ll have more pictures and stories to share.

I took Kristy out to dinner on Thursday.  We went to a nice little Italian place, but we split a dinner.  That went a long way toward controlling the calorie intake, and saved a few dollars.

I’m going to have to try to continue to eat that way for the next week and a half.  I’m leaving for Florida with her, and we’re getting married on the 12th in Cocoa Beach.

I am bringing  bikes with me (Oria for me, Nermal for my mother, and Kristy’s bike).  I’ll attempt to get some riding in.

I did ride to work and back on Monday.  I rode a partial commute on Thursday.  That’s not nearly enough miles, but life has been crazy.