This year has not been good for my weight loss.  I haven’t been weighing regularly recently, and I’ve been eating poorly too often.  I stepped on the scale this morning, and was horrified to see the scale at 215.0 lbs.

215 lbs is about what I weighed back in January.  I’m going to have to really push hard to get back under 200 lbs by the end of the year.  I’m going to Florida in less than a week.  I have another conference to attend in October in St. Louis.  I need to learn better eating habits when travelling.

For now, I’m back at home, and will be back on the bike.  I’ve got some good food around the house, and need to watch how much of it I eat.

One thing about conferences: They usually feed you well.  I’m only two days into this conference and I’ve probably eaten two weeks worth of calories.

The picture below was taken from Chart House restaurant at the top of Tower of the Americas.  I ate dinner there last night.  It was one of my healthier meals until desert came around. 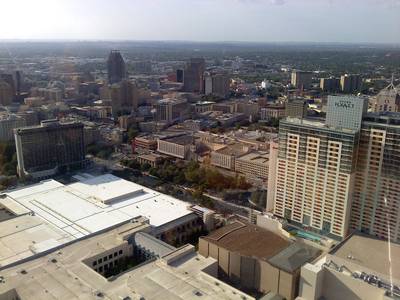 Today brought a wonderful selection of fruit and breakfast burritos in the morning, and a big spread for lunch.  I don’t know what dinner will bring, but I’m not yet ready for more food.

I flew to San Antonio this morning.  I’m sure being away from home and having a ton of great restaurants is going to be bad for my weight loss effort, but I’ve been gaining weight in recent weeks anyway.  🙂

I was unable to borrow or rent a bike  for this trip, but I will be a pedestrian and enjoy the Riverwalk. 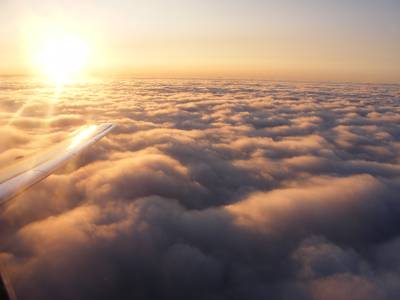 I haven’t done much bike riding other than to work and back.  I haven’t even done enough of that.

My commute is mostly flat and can be high-stress due to traffic.  So tonight, I went for a nine-mile spin in the country after dark.  My lights lit up the cats, skunks, bats, and even a frog along the road.  The night insect noises and the whir of my tires were the only noises.  There were a few hills to challenge my legs a bit more than usual.

There was some distant lightning that was my cue to keep the ride short.  I really wasn’t in the mood to get stuck in a thunderstorm.  I’m now home, and the lightning is still distant, so I could have probably squeezed a few more miles in, but I’m happy with the ride I had.

Although short, this was the best ride I’ve had in a while.  It does wonders for clearing the mind.

I rode Oria, my recumbent to work today, and it felt wonderful to be back on the bike.  I had forgotten that today was our company picnic.  After eating too much, throwing water balloons, and playing cornhole, I decided that to bring my “weird bike” out would be entertaining.

Several people rode it around, only one crash, and no injuries.  🙂  I think several people just found out today that I ride my bike to work.

Most people have a really positive opinion when they see a recumbent.  Nobody thought it was silly.  We even have one “go-fast roadie” type who was impressed with the bike.

I had intended to start riding again last Wednesday, but that didn’t happen.  I did however ride to work today.

I have a lot of crazy stuff going on in my life right now, most  of it is positive, but it’s taking up my time.  I’m not losing weight right now, but just trying not to gain.

The ride this morning was on Oria, the recumbent.  It was a good ride with a mild headwind.  Traffic was polite, if a bit heavy.  I couldn’t have asked for better weather.  Mostly clear and the temperature about 70F.

Riding to work helps my mental state.  I really needed this ride.  🙂

I haven’t ridden much.  I’ve gained weight.  I’ve been busy.

I’m going to hop on my bike tomorrow morning and ride to work.  I’m going to quit drinking Coke (again).  I’m going to eat out less. I have Nermal’s rear wheel fixed, and will re-install it tomorrow.

I’m spending some time with Kristy on Friday and Saturday.  I’ll also be school shopping for my daughter.  I’m hoping to get a good ride in on Sunday.

I’ve had some depression issues recently.  I’m not sure how much of it is due to work, and how much is due to not riding my bike and gaining weight.  The solution is to ride my bike… which is harder when I’m depressed.  I’ve got to break out of the cycle.

I only rode to work two days this week.  The flash flooding, oversleeping, and after-work plans kept me driving more than I care for.

After deciding to sell the recumbent, then changing my mind, I did ride it to work today.  I’m still suffering knee pain while riding it.  There are no big hills on my commute, maybe something needs adjusting.

My 17-year old daughter is moving back in with me.  She has lived with her mother since the divorce, but she’d rather take her senior year of high-school here rather than in Michigan.  I’ll be driving up there on Sunday to move her.

I’m still eating too much.  After two decent days, today was over 4000 calories.

There has been so much for Kristy and I to do to prepare for our wedding next month.  Life is a little crazy.  I’m spending a couple of days at her house this weekend (before the Michigan trip).

Kristy is spending another week out of town later this month.  I’m attending a conference in San Antonio at the same time, but Kristy will be on the east coast.

I’ve been up to late almost every night this week just getting stuff done.  Today it was housework and packing for spending the weekend with Kristy.  It’s been really hard to focus on my weight loss while this busy and somewhat stressed out.

I’ve decided not to sell it. Kristy was shocked when I told her, then I noticed a broken spoke on Nermal.  I’m going to re-think the whole one-bike idea.

This will shock many of you who know me, but I’m selling Oria, my Bacchetta Agio recumbent bike.  I’ve decided that I really only need one bike, and Nermal, my upright bike, is more versatile.

What makes this bike great?

This bike was bought new from Schellers in Clarksville in July 2008, and has approximately 2600 miles on it.  It has been well taken care of, and has a number of upgrades.

This bike would be great for touring, commuting, or just riding for fun.  I’m asking $1200.  Contact me with questions, or for a test ride.  I only deal locally.  Cash only.

Why am I selling?

There are a number of reasons I’m selling this bike.  I have re-prioritized my life, and although I plan to ride as much as possible, I really only need one bike.  I also need the money.

I rode the Tour de Cure back in May on this bike.  It was a hillier ride than I expected, and I’ve struggled with hills on this bike ever since.  I think it’s mostly psychological, but my attempts at overcoming this have failed.  The last long ride I took on the bike was initially planned to be 120 miles, but I wimped out at about 90 miles.

I also test rode a Surly LHT during my West Virginia trip.  I’m sold.  I want one.  Selling this bike will not allow me to buy the LHT, as I have other needs for the money.  I can, however, plan on replacing Nermal in the future with one bike that can do it all.  The LHT is that bike.

I intended to ride to work every day this week. I did ride yesterday, but this morning brought severe thunderstorms and flash flooding. The drive into work was quite interesting with impassable roads. Work is hectic today with some flooded offices and roof leaks.

I’m back to weighing myself every day and tracking my eating. I’ve been bad about doing that recently.

I had to drive to Niles Michigan over the weekend.  I brought my bike with me, and managed a 20-miler before heading home.  It was a beautiful Sunday morning, there were a number of other cyclists out, including Joe, riding a Rans V-Rex.

I used to live in Niles, and know those roads, but after nine years, and never riding a bike on most of them, it was definitely a bit of an adventure.

The riding was wonderful.  The hours spent driving the truck… not so much. 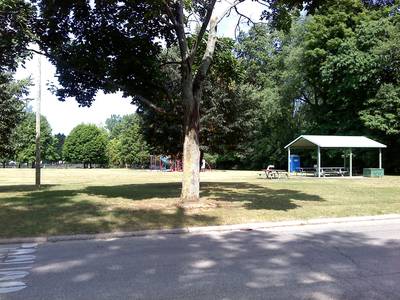 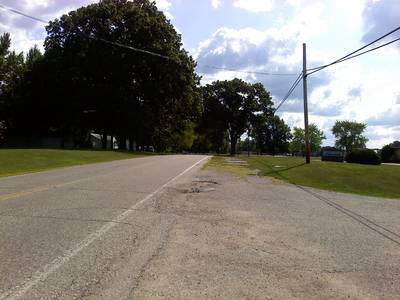 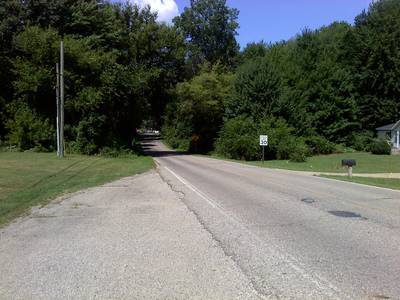 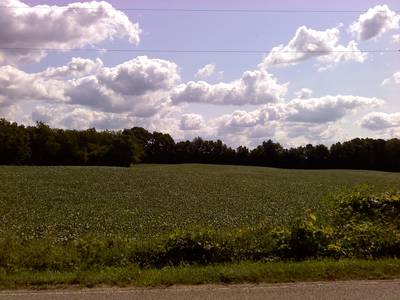 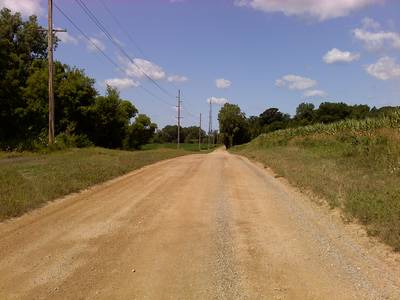 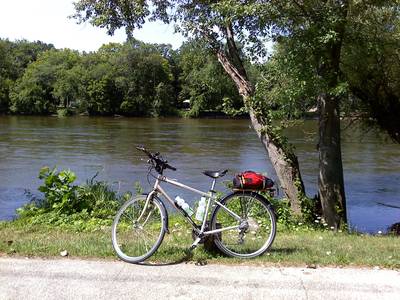